The Copper Mountain event attracted one of the biggest and deepest starting fields in World Cup history as athletes looked to gain valuable FIS points necessary for Olympic qualifying. The Sprint US Grand Prix made its debut on the FIS World Cup schedule in both freeskiing and snowboarding halfpipe and slopestyle. The Tour also holds a World Snowboard Tour 5 Star rating for snowboarding as well as the highest AFP (Association of Freeskiing Professionals) rating of Platinum for freeskiing in both halfpipe and slopestyle.

The Copper Mountain event was originally scheduled as the second stop on the three-stage Sprint US Grand Prix; however, the first event at Park City in December had to be postponed until February due to poor snow conditions.

Competition began on Wednesday 9th January with qualifying rounds in the men’s and women’s freeski halfpipe and men’s snowboard slopestyle.

The men’s freeski halfpipe qualifications involved four heats with the top two placed competitors from each heat progressing through to the finals along with the next four best competitors overall, for a total of 12 finalists. After crashing in his first run, Byron Wells opted for a relatively conservative second run which saw him qualify first in his heat and sixth overall with a score of 88. Unfortunately he sustained a soft tissue injury which subsequently prevented him from competing in Friday’s finals.

Jossi Wells was disappointed to miss out on halfpipe finals qualification, finishing fifth in his heat with a score of 76 after crashing in his first run. Younger brother, Beau-James, finished sixth in his heat. He landed his first run but a riskier second run saw him push the envelope a little too far. Lyndon Sheehan (Wanaka) suffered a similar fate; gaining confidence with a strong first run but coming unstuck in his second. Lyndon placed fourth in his heat with a score of 68.6.  Despite some disappointment the New Zealand men were pleased to have all achieved top 50 per cent results.

Competing in the women’s freeski halfpipe, Janina Kuzma (Wanaka) opted to try out a new, riskier run but unfortunately the gamble didn’t pay off. Flat landings and a lack of amplitude led to a disappointing eighth place finish and a score of 62.3. The women’s field competed in two heats with the top four results from each heat and the next best four overall making the final cut.

Stef Zeestraten (Wanaka) had been aiming for a top 16 place in the men’s snowboarding slopestyle event; however a heavy fall in training and subsequent shoulder injury put paid to this goal. Despite landing both runs Zeestraten finished in 47th place overall. Ben Comber suffered crashes in both runs, finishing 78th, with Tim Herbert 51st.

Day two of the Sprint US Grand Prix at Copper Mountain saw New Zealanders compete in the men’s freeski slopestyle and snowboard halfpipe competitions but flat light meant that conditions were not ideal.

Jossi Wells landed a new run for the first time in competition including back-to-back switch left and right double 1080s to score 79.6 and place third in his heat. He was 21stoverall, missing out on finals qualification.   Beau-James Wells scored a 78 on his second run for a fifth place finish in the same heat and 25th overall.

Other New Zealanders in the competition included Hamish McDougall (Wanaka) and Alec Savery (Queenstown) who placed 55th and 81st respectively. Byron Wells chose not to compete due to injury.

Hamish Bagley was the sole New Zealand representative in the huge and deep field of some 85 men in the men’s snowboard halfpipe. He claimed 18th in his heat and 71st overall.

The third day of competition at the Sprint US Grand Prix saw two of the three New Zealand competitors in the top 10 in the women’s snowboard slopestyle event. Stefi Luxton (Wanaka) placed seventh and Rebecca Torr (Te Puke) ninth.

Weather conditions made for a tough day with competitors battling freezing temperatures, strong wind and snowy conditions which made for slow in runs. Conditions in training had been so difficult that riders struggled to gain the necessary speed and event organisers made the decision to cut the last jump.

Stefi Luxton was the first of the Kiwi riders to take the course. She maintained focus despite a crash in her first run, to score 77.3 in the second run and qualify fourth in her heat. Rebecca ‘Possum’ Torr also had a strong second run which put her in fifth place in her heat with a score of 77, just missing out on finals qualification. Shelly Gotlieb (Ohakune) suffered a disappointing day, crashing on a backflip off the first jump in run one and then again on a cab 5 trick on run two.

Straight on to the finals with Stefi Luxton the first rider to start and struggling for speed under challenging conditions. After a crash on the first run she nailed a backside three on the second run before under rotating on a front side 540 and so failed to score as highly as she would have hoped. Nevertheless, Luxton reported that “it was a fun day of snowboarding in some challenging and tough conditions” and she was pleased with the result. She was also “really happy to walk away without injury” after other riders suffered a less fortunate fate.

Tom Willmott, Snow Sports NZ Head Coach for the Park and Pipe team, was also “extremely happy with today’s results and pleased to see the team remain positive despite the challenging conditions.

“Having two out of three riders in the top 10 is definitely a good start to our Olympic campaign,” he said.

Slopestyle snowboarding is a newly added Olympic sport and will feature for the first time at the Winter Olympic Games in Sochi, Russia in 2014.

Saturday marked the final day of competition with three New Zealanders scheduled to take the start line in the freeski slopestyle. A fall in training resulted in a bruised heel for Adie Lawrence (Queenstown) and she was unable to compete, leaving team mates Rose Battersby (Taupo) and Anna Wilcox-Silfverberg (Auckland) to fly the Kiwi flag.

After a crash on the final hit of her first run Rose was able to pull her performance back, landing a left 360, right 360 and left 900 on the second run, just squeezing into 12th place with 73 points and claiming a spot in the finals.

Anna Wilcox-Silfverberg put together a career-best performance in qualifying, landing a rail slide to fakey, switch 180 to left 360, to rodeo 540 and scoring 67 points in her first run. She repeated the sequence in her second run, showing even better execution and bumping her score up to 71.3 for 16th place. While not strong enough to reach finals qualifications the result puts her within the top 50 per cent of the field and meets New Zealand Olympic Committee qualifying criteria.

In the finals Rose Battersby crashed on a 900 in her first run and then caught a rut on the second run which meant she did not complete the course. Although disappointed by the final result, Battersby was happy to have made the finals and will now train hard to increase her repertoire of tricks, looking to improve her performance as the northern hemisphere season progresses.

In summing up the four days of competition Tom Willmott confirmed that, while happy with the team’s results at this stage of the season, he and the athletes are very aware that they will need to step-up their performances in order to tick off the season’s goals, with a major focus being Olympic qualification.

While the team did not achieve podium places, having four athletes qualifying for finals reflected solid performances and meant that they were accruing Olympic qualification points.

“We definitely have work to do in order to become more competitive,” Willmott commented.

For snowboard athletes, focus is now on the Snowboard World Championships in Stoneham, Canada while the skiers have a couple of weeks’ valuable training time ahead of their World Champs in Norway in March.

For Jossi and Byron Wells, all thoughts will be on the X-Games which begin in Aspen, Colorado on 27 January. Jossi will compete in the Big Air and Byron in the freeski halfpipe. 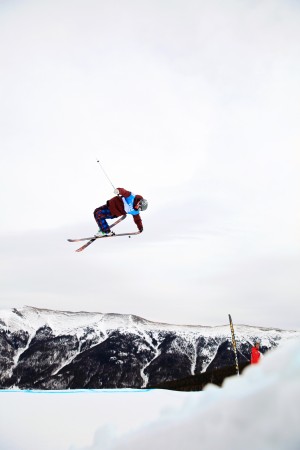