New Zealand ski racer Elizabeth Reid (Invercargill) has won four gold medals at the FIS children's race held in Pra Loup and Le Sauze in the French Alps from 27 - 30 March. Elizabeth competed in the women's U16 category. The event attracted 175 racers from 11 different nations. Thanks to Elizabeth's results New Zealand placed third in the Nations' Cup.

The Super G (single run) on day one was held in overcast conditions with hard snow, a rolling pitch and smooth jump. With a winning time of 1:13.70 Elizabeth was 82/100s of a second ahead off the second placed athlete from Monaco.

Giant Slalom (two runs combined time) was held lower down the piste in bright sunny conditions on day two with the finish area into the resort. After the first run Elizabeth was 3/100s of a second off the leader and lost another 35/100s of a second in the second run to finish in second place with a combined time of 1:34.81. The race winner was later denied a medal by the race organisers due to eligibility issues, and Elizabeth was promoted to receive the first place trophy.

The Super Combined (one run slalom and one run GS - combined time) on day three moved to nearby Le Sauze. After having finished the Giant Slalom (GS) race in second place Elizabeth was determined to dominate in her preferred discipline of slalom (SL). In the first run of SL she achieved a commanding lead of 2.16 seconds  and lost 0.42 seconds on the second run of GS to win with a combined time of 1:35.76.

The main prize giving ceremony was on Saturday night (day three) and only then did the news come about being promoted to receive the first place trophy in GS. So the question then became could Elizabeth make it a grand slam with her preferred SL event next on day four?

The slalom (two runs combined time) was also held at Le Sauze. Daylight saving had kicked in overnight so it was a dark early start to day four. Elizabeth had been carrying a niggling cough and was close to vomiting after the first inspection. The first run did not go to plan and Elizabeth was in second place 58/100s of a second off the leader. So it was all on for the second and final run, which she pulled out all stops for and won by 1.30 seconds to finish first with a combined time of 1:23.44. She’d achieved the grand slam four out of four gold medals.

A final prize giving for the SL and Nations’ Cup followed. The Nations’ Cup is a measure of the combined teams’ performance with world cup type points allocated to each team made up of points for each athlete's place in each race (max ten athletes per team - made up of U14 and U16 boys and girls). This time New Zealand had a team of one.

France claimed the Nations' Cup with Ukraine in second place. 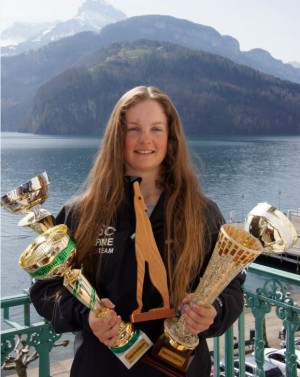