The first tranche of athletes selected to represent New Zealand at Beijing 2022 have recorded a slew of incredible results over the past few seasons. Zoi Sadowski-Synnott became the first snowboarder to ever defend a FIS Snowboard Slopestyle World Championships when she retained her title in March this year. She landed on five other World Cup, X Games and World Championships podiums this Northern Season, including a gold medal at the Big Air World Cup in Kreischberg (AUT). Nico Porteous is the current Freeski Halfpipe World Champion and X Games Superpipe gold medallist.

"I'm feeling great about Beijing. I'm looking forward to getting there and just doing what I love and skiing at my best," said Porteous.

"It's great to be back on snow and we're getting some really good training in so I'm feeling good."

Alice Robinson was a member of the 2018 Olympic Winter Games team when she was just 16 years old. Since then she has gone on to become New Zealand's most successful ever ski racer, stunning the Alpine Ski Racing world with five FIS World Cup Podiums, including her win at the Sölden (AUT) season opener in 2019 at just 17 years old, making her the youngest woman from any nation to win this race.

"I've grown a lot as a person and as an athlete over the past four years. PyeongChang was a fantastic experience for me and I leant a lot from it, I've made a lot of gains since then and I'm really looking forward to Beijing and I'll be doing everything I can to get on the podium," said Alice.

Finn Bilous, PyeongChang 2018 Olympian and 2018 Winter Games NZ big air bronze medallist and Margaux Hackett, first time Winter Olympian, will both be representing New Zealand in the freeski slopestyle event as well as participating in the freeski big air event, which is making its Olympic debut in Beijing 2022.

Further Beijing 2022 selections will take place between October and January with additional alpine, cross country and freeski and snowboard athletes working towards qualification, as well as athletes from ice sports including speedskating, ice figure skating, luge and curling.

“Well done to these athletes for all the hard work that has gone in to get you to this point,” said Smith.

“It’s great to be naming Olympic medallists and World Champions in our first Winter Olympic selection and we’re thrilled there is so much young talent coming through the ranks.

“We are looking forward to watching these athletes represent our nation and add to our proud Olympic legacy as they earn the fern in Beijing next year.”

"The athletes selected today have delivered world class performances across the qualification period to book their Olympic spots,” said Cavanagh.

"To be selected for the Games at this early period is an outstanding achievement. These athletes are all ranked amongst the world’s best athletes for their chosen disciplines and they’re looking forward to wearing the fern and making the country proud when they compete in Beijing.”

The selected athletes along with other Snow Sports athletes working towards qualification and nomination will head to the Northern Hemisphere in the coming weeks for their pre-Olympic winter season.

The Olympic Winter Games will take place in Beijing, China from February 4-20, 2022. 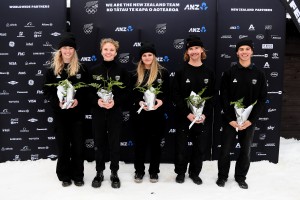