New Zealand’s top snowboarders have welcomed recent news that two events of the Sprint U.S. Snowboarding Grand Prix in Park City and Copper Mt. will become FIS World Cups this season and will also count for the World Snowboard Tour.

With the 2013 FIS Snowboard World Cup season having kicked off at the end of August with a high-class halfpipe competition and the best starting field of recent years at Cardrona Alpine Resort, this winter season will provide a total of nine more FIS World Cup freestyle snowboarding competitions securing the best Olympic Qualifier period ever.

Focusing mainly on the Olympic events of halfpipe and slopestyle, the FIS Snowboard World Cup this season is designed to achieve its goal of “quality over quantity”.

Following successful discussions between FIS and its National Associations, as well as local organisers with representatives of the World Snowboard Tour in order to harmonize the freestyle snowboarding calendar and allow more riders to qualify for the 2014 Olympic Winter Games in Sochi, Russia, the first ever co-sanctioned FIS World Cup competitions have emerged.

Hosting nine high-standard halfpipe and slopestyle events plus the FIS World Championship competitions in these events that are also part of the Olympic Qualifying process, gives every rider the chance to qualify for the next Olympic Winter Games.

Snow Sports NZ’s Tom Willmott, Park and Pipe Head Coach for the Winter Performance Programme, says having co-sanctioned competitions will be of real benefit for New Zealand’s athletes and should make for better training and performance opportunities in the lead up to the Winter Olympic Games in Sochi in 2014.

“This year we won’t need to be chasing competitions, we can be more selective in the events we target which will allow us to maximize training opportunities rather than be on the road for the whole season.”

“We will run five halfpipe and four slopestyle top-level FIS World Cups this season. Those contests will allow riders to choose where to start and provide them with several options to achieve the qualification standards for Sochi 2014,” said FIS Snowboard Race Director Uwe Beier.

For riders who do not yet have the minimum of FIS point level mandatory to start on the FIS World Cup tour, the requirement has been reduced for the first two halfpipe competitions (Cardrona and Park City) and slopestyle contests (Copper and Sochi).

“Riders can enter the first two FIS World Cup halfpipe and slopestyle competitions with zero FIS points,” explained Beier, who also pointed out that fewer events ran at the highest level meets the demands of the riders.

“As a result, this Olympic Qualifying period has never been better for riders: there are no calendar conflicts, top organised events at excellent facilities with high-quality standards!”

The 2013 FIS Snowboard Freestyle World Cup consists of three events (halfpipe, slopestyle and big air) and features a total of ten competitions. The next stop will mark a special highlight when for the first time in history, a FIS World Cup will take place in Belgium. The city of Antwerp will host a big air contest. 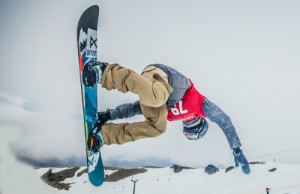