Vinterpark, Norway (4 March 2013) -  Competition is underway for the New Zealand Freeski team at their pinnacle event of the season. Janina Kuzma got the job done in the halfpipe in Oslo qualifying in ninth place for finals on day one of competition at the FIS Freeski World Champs in Norway.

Kuzma cracked her first final of the season, being rewarded for good amplitude and execution in her run which started with a mute grab to ally-oop critical to left 540, finishing with a left 720 to switch un-natural 360.  She is excited for the night finals tomorrow where she is hoping to continue to build momentum and has some tricks up her sleeve!

Beau-James Wells with his usual style and performance focus continued his progression, landing his recently learnt right double cork 900 on the second hit of his run, and then went one better in his second run grabbing it for the first time in competition.  Unfortunately a sketch on the landing of his last hit and he missed out on finals by a whisker, finishing in 13th place for the 77.8 he scored in his first run.

Lyndon Sheehan in the same heat as Beau, landed his first run although needed to tidy it up.  Under pressure to improve his score in run two, Lyndon took the run trick by trick, improving his grabs and overall execution to increase his score by over 10 points posting 72.2 and placing a creditable 16th.  Jossi Wells tweaked his ankle in his first run which significantly impacted his performance, finishing in 19th.

It’s off to Voss for the Slopestyle event for Jossi & Beau Wells, who will be joined by Hamish McDougall, Nick Rapley and Anna Wilcox-Silfverberg. 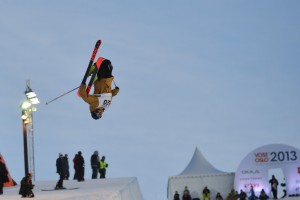