Cardrona, New Zealand (6 September 2018) – The world’s best freeskiers and snowboarders were vying for spots in the FIS World Cup Big Air final at the Audi quattro Winter Games NZ at Cardrona Alpine Resort today. NZ's Finn Bilous was one of the standout performers, finishing making the cut to World Cup finals with a second place finish in his heat. NZ's Corrah Phillips qualified to the finals of the women's Snowboard Big Air in sixth place.

Competitors had plenty of motivation to showcase their most technical and progressive tricks with the first World Cup Big Air of the 2018/19 season also an opportunity to earn AFP Platinum level and World Snowboard Tour Elite International level points.

With 48 world-class snowboarders competing for just 10 spots in the men’s World Cup final and only two runs to impress the judges, going big was the only option. PyeongChang 2018 Olympic silver medallist (Big Air) Kyle Mack (USA) did just that, with a stomped backside triple 1440 Japan grab and a score of 90.60 for the top qualifying spot in heat one.

Recently crowned Junior World Champ in Snowboard Big Air and Slopestyle, Takeru Otsuka (JPN) was right at home in the World Cup field, scoring 88.40 on run one with a frontside triple 1440 mute grab. Teammate Yuri Okuba responded with a backside triple 1440 mute grab which put him through to finals in third place. Leon Vockensperger (GER) and Mons Roisland (NOR) claimed the final two qualifying spots in men’s snowboard heat one.

No stranger to World Cup podiums, the USA’s Chris Corning booked his place in the finals with a backside triple 1440 melon and a 91.40 on run one. Nicholas Huber (SUI) finished fourth with Clemens Millauer (AUT) on the fifth-place bubble with a score of 88.60.

NZ rider Carlos Garcia Knight pushed hard with one of the biggest tricks of the day, a switch triple 1620, but couldn’t quite stick the landing and missed out on the final.

The women’s snowboard Big Air qualifying saw teammates Miyabi Onitsuka and Reira Iwabuchi from Japan battle for the top score. Onitsuka initially held the lead with a backside 720 mute grab and 92.40 on run one but was bested by Iwabuchi who landed the same trick but with bigger amplitude and smoother execution for a score of 94.00 on run two.

The men’s Freeski Big Air heat two qualifiers – postponed due to high winds yesterday – rounded out an action-packed day. First man out of the gate, Birk Ruud (NOR) set the bar high with a massive left triple 1620 high mute which would see him through to the finals in third place.

Evan McEachran (CAN) span the biggest trick of the day, a switch double 1800 tail grab (five full rotations in the air) with an exceptionally long grab, landing halfway down the landing and leapfrogging in to first place.

NZ’s Finn Bilous went huge with a trick he had just learned, a unique switch triple rodeo 1440, holding the grab through the rotation and stomping the landing for a first run score of 93.40 which put him through to finals in second place.

“I’m pretty stoked to put that down,” said Bilous.

Alex Beaulieu-Marchand (CAN) recovered from a heavy landing on run one, putting down a switch triple 1260 with a bow and arrow grab on his second attempt and finishing in fourth place.

James Woods (GBR) brought his trademark octo grab to the table with a switch triple 1440 landed near the bottom of the landing, to complete the top five finalists. 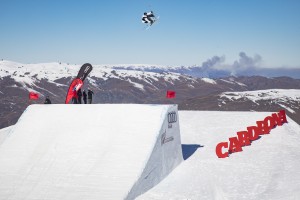