After the event Finn explained “The level of riding today was super high, I think with the Olympics coming up in a month everyone has been riding a lot and working on new tricks and that was showing in their riding today. I was really happy to make it through the qualifying round after a lot of changes to the programme this week due to weather”.

Finn put down a solid first run in the finals with a technical rail section, including a back 6 off the rainbow rail. He landed a double 1260 on the first jump and linked it into a switch triple 1260 on the final jump. He was rewarded with a score of 78.50, which left him sitting in fourth position after run one was complete.

Heading into run two he knew he needed to step it up to get himself into a podium position, but unfortunately Finn wasn’t able to execute a clean landing on the final jump.

“My first run had a couple of bobbles, so not quite what I was looking for. Going into the second run I just really wanted to land everything clean” said Finn, “On the last jump I just didn’t quite have the speed to do the switch triple rodeo 1440 so I opted for the 1260 and just squeaked it around. I touched my bum on it [on the snow on landing] so the execution points went down unfortunately, but onwards and upwards from here”.

His first run score remained his top score, putting him in 12th position after all the remaining athletes had completed their runs.

“I made one minor mistake [in my second run] that ended up costing me my spot in finals. I missed out by about a point which is always a bit bittersweet but definitely stoked with the result overall and squeaked a personal best result in slopestyle for me by one position.”

It has been an action packed weekend for the Kiwi Freeski and Snowboard Team competing in Mammoth. Yesterday they won a medal of each colour with Nico Porteous taking the big win in Freeski Halfpipe, Zoi Sadowski-Synnott claimed the silver in the Snowboard Slopestyle and Tiarn Collins snagging the bronze in the same event.

Finn and Ben are heading off to Europe tomorrow. Finn plans to get a couple of high quality training weeks in to really dial in some tricks he plans to include in his Olympic run in Beijing and Ben will be in the bib again at the Font Romeu Slopestyle World Cup. 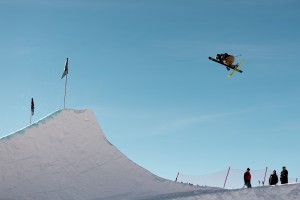