Qualifying fourth in his heat, Finn was looking to step things up for the three-run, 12-men final. Run one got off to a promising start with the Kiwi landing a safety run for a score of 65.03 with room to clean up execution and push the technicality of his tricks. He did that on run two, upping the rotation on jump one from 900 to 1260, landing back-to-back double 12s and wrapping up with the 1440 on the third hit. He improved his score to 73.23 to edge a little higher on the scoreboard into seventh place with one run left to take.

With everything left to play for on the third run, the wind began to pick up, adding to the challenge. Finn was unable to nail his last run with a bobble on one of the rails and then a crash on the second jump and he would finish his day in ninth position overall.

“It was so rad to see Nico & Zoi both win their events yesterday and had me super motivated for today's finals,” said Finn . “Unfortunately the conditions were tough for finals today, battling against some gusty winds. I had a really good training but wasn’t able to put down the run I wanted in the competition. It was a frustrating result but I'm looking forward to using it as motivation for big air in a couple of days and into the Slopestyle World Cup next week”.

It would come down to the last two runs of the day to decide the podium positions with top qualifiers Andri Ragettli (SUI) and Alex Hall (USA) both saving their best for last. Four-time crystal globe winner Ragettli claimed the title with a top score of 90.65, pushing the USA’s Colby Stevenson back into the silver medal spot with Alex Hall (USA) landing his first clean run of the day for the bronze. 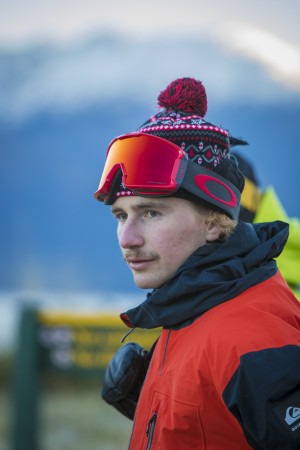