Following three days of waiting for the wind to calm down, Mother Nature finally decided to cooperate with the organisers at the Pyrenees resort, bringing sun and mild temperatures as a background for what was a fully packed day at the second slopestyle World Cup event of the 2018/2019 season.

The day started with the men’s qualifiers rounds, and sixty of the world’s best gunning for a spot in the 16-man final. Finn put the week’s weather challenges behind him to earn the fourth highest score in his heat and his ticket to the final.

“With only one sub-par day of practice, I hadn’t landed my competition run the entire training, so it was a real relief to ride away clean and get rewarded with a high score in the qualifying,” reported Finn.

He continued: “Going in to finals I still had a couple of tricks to help improve my score. I was able to land both my runs, with my first being slightly better scoring.”

“It was a very long day of competition,” commented Finn. “I’m happy with how I skied and really pumped to be heading to Colorado tomorrow morning in a healthy condition to prepare for X-Games in just over a week.”

Alexander Hall (USA) claimed victory at the Font Romeu World Cup with second spot going to Philippe Langevin (CAN) and Andri Ragettli (SUI) finishing the competition in third, jumping on the podium with the last run of the competition. 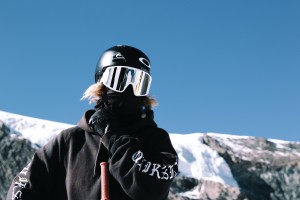