Following the International Olympic Committee’s decision last year to add Freeski Big Air to the Olympic programme for Beijing 2022, the discipline was confirmed as a new addition to the World Championships programme, with Utah 2019 being the premier.

Today’s start list featured the world’s best athletes but only 10 – the top five across two heats – would make the cut to finals. Things looked to be off to a solid start for Bilous when he landed a switch triple rodeo 1260 and a score of 92.75 from a possible 100 on his first qualifying run. However, it soon became clear that there was work still to be done.

“I knew I would have to put down some heavy tricks in such a stacked field,” explains Bilous. “Just before my second run Jesper Tjader (SWE) scored a 94.50 and bumped me in to sixth place which meant I wouldn’t have qualified. The pressure was on and it was pretty nerve-racking but I was happy to land a switch triple rodeo 1440 and just qualify through (with a score of 93.50).”

In FIS Big Air finals, competitors take three runs and must spin tricks in two different directions with the combined scores counting for their overall score. Runs are scored according to trick difficulty, execution, amplitude and landing.

“The forwards triple cork 1440 was the trick that got me on the podium at Winter Games last winter,” explains Bilous, “but we decided it was time to try a brand-new trick. If there was a time to land it this would be it.”

He pushed hard for a higher score on run three, landing a right triple 1620 (four and a half full rotations in the air) for his first time in competition but lost points for a pole drag on landing, and would finish in fifth place.

“I’m pretty satisfied, I put it all on the table today,” he said. “It would have been better to have landed that trick clean but all in all I’m pretty happy and looking forward to slopestyle next.”

Today was the first day of competition for the New Zealand team in Utah. Earlier in the day Margaux Hackett finished 13th in ladies’ freeski big air qualifiers and Jacob Tapper-Norris 34th in men’s qualifiers, both missing the cut for finals.

Bilous, Hackett and Tapper-Norris will be back in action at the World Championships on Wednesday (NZT) for Freeski Slopestyle. Carlos Garcia Knight, Christy Prior, Mitchell Davern and Zoi Sadowski-Synnott will be competing in Snowboard Big Air on Wednesday. 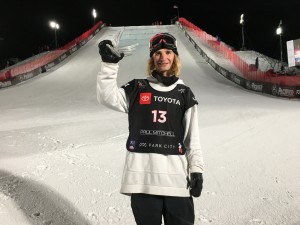