Welcome to Snow Sports NZ / News / Ever Wondered What it’s Like Hurtling Down a Mountain at 148km/h?

Ever Wondered What it’s Like Hurtling Down a Mountain at 148km/h?

NZ Speed Skier Tawny Wagstaff will tell you it’s “the best feeling in the world.”

You can take his word for it, he’s just won the Speed Downhill class at the World Cup in Sun Peaks, Canada. Actual speed: 148.56km/h.

Sun Peaks is regarded as the most technical speed track on the World Cup circuit, with a convex slope consisting of two roll overs, exaggerated compression at the bottom and short finishing area.

Tawny has skied for 30+seasons, worked as a coach for Team Hutt, been a heli guide and ski instructor. Actual repetitive time spent practising tucking at higher speeds? One season.

“It was definitely a surprise to a lot of people that this Kiwi came from out of nowhere and won!” he says of his recent victory at Sun Peaks.

“2018 I am planning on following the entire circuit, starting again with Canada, racing with the world’s fastest.”

“The speed track at Vars in France is the track used for the world record attempts, currently standing at 254km/h, invitation only. My goal is to run this course when the opportunity arises.”

Sourcing all the right gear for the coming season is now top priority.

“The speed skis, rubber suit, leg fairings, flared helmet and aerodynamically altered boots are all part of the ‘Speed 1’ category,” explains Tawny. “The fairings are very personalized and need to be custom made which is what I will be doing. Dave Stewart at One Studio is helping me to organise the speed suit which is a special fabric only produced in Europe by one manufacturer, and the flared helmet I will also be sourcing in Europe.”

Speed skis are handmade in limited numbers and not the easiest to get hold of but Tawny was lucky enough to score a pair at prizegiving in Sun Peaks.

“During the prize giving the original owner of Mcsporties (a local ski racing shop based in the Sun Peaks Village) and the new owner, in collaboration with Atomic, was finally (so he said) able to give away a brand new pair of Atomic speed skis and bindings (238cm), the first time that this has happened. I was that person! You might imagine it was quite an honour and a surprise!”

We had a lot of snow in the week leading up and during the event. Due to the visibility we were starting lower down on the track during the first two days of training. As the visibility improved we were able to move to the higher start positions on the first World Cup day but not quite from the top.

The course was not quite as smooth as what it could’ve been due to recent snow so the higher we went the more we were thrown around. This, along with the reduced visibility due to the flat light, caused a few crashes for some of the competitors but nothing major, fortunately.

Having run the lower starts a few times I was confident and aggressive with my tuck and secured the win!

On day two the weather cleared. We started from the last start point of day day for the first run and the second run (finals) we were able to start from the top.  Being first time off the top I was definitely cautious and wary of the increased speed over the hollows and the compression at the bottom of the course.  I finished with a solid run from the top, good enough for fourth place, with the top three ahead of me all having run from the top a number of times in previous years.

After this the weather turned for the worse and it snowed all night, unfortunately meaning that although they were packing it down it was still too soft in the finish area to safely run the third day. 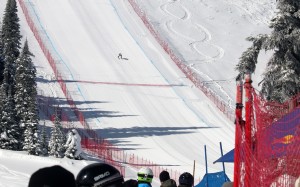