In a field of twenty women who had each fought through a rigorous qualification process to make the games Eustace was among an elite group fighting for position in the two day competition.

At speeds of more than 100km per hour down the 1.8km course Eustace looked for every opportunity to improve her speed, eventually pushing among the fastest starts and driving brilliantly on a new track to tie with world champion Melissa Hollingsworth of Canada with a combined time of 3.36.21 over four runs.

Coach Terry Holland acknowledged the achievement of the skeleton racer. “We’re incredibly proud of Katharine,” he said. “She’s in a real elite field right now. After a tough start to the four race competition she adjusted her run, and her equipment and tonight performed exceptionally.

"The last run was solid, she put in a big push and drove the last three or four turns brilliantly to tie for eleventh.”

Winter Performance Programme director Ashley Light also said Eustace’s performance at the Sochi Olympic Games was of a high quality and delivered an improvement of almost a second between her first and final time.

“She beat last year’s world champion, improved three places in her rankings and improved her time by 800th of a second. It was a very good result in a tough field.”

With no skeleton facilities or coaching in New Zealand, Eustace has been based overseas, picking up a new coach in US-based veteran skeleton coach Terry Holland since only the beginning of 2014 and has made great improvements. Push times have been helped by NZ-based power physiologist Angus Ross via skype.

“New Zealand is not renown for its ice sports and Katharine has been forced to be an international globe trotter following the sport. This makes Katharine’s results all the more rewarding.” said Light.

Eustace herself was pleased with her result. “I was a little nervous going into the final race but knew I just had get in there and do it. I did my best when it really counted,” she said. “I was really proud to represent New Zealand.”

Sandford has finished in twentieth position after day one of the two day men's skeleton competition. Twenty racers will go through from the first three races to a fourth and final medal race at the Sanki Sliding Centre late tonight. Sanford will be looking for improvements in his sliding and explained that injuries sustained during qualification are hindering his push times.
Sandford competes again late tonight (race 3 NZT 3.45am, race 4 5.30am 16 Feb).

The team initially treated the injury as a potential break and Wells was taken by ambulance to the Olympic Village medical clinic. No fractures were found and the injury is not thought to be significant at this stage.

“We decided to take all precautionary measures as Byron was initially in a bit of pain,” said coach Tom Willmott. “However the doctors are happy that there is no significant damage and we’re not ruling Byron out of competition.”

"There is a scheduled rest day today and we'll monitor his progress and recovery."

For the rest of the freeski halfpipe team including Beau James and Jossi Wells, Lyndon Sheehan and Janina Kuzma training was positive with two more days in the pipe for competition on the 18th. 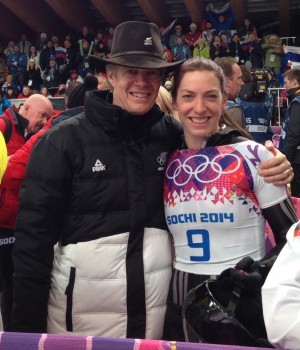