It was a convincing victory against a strong international field which included several World Cup racers. Jamie won each of his five heats before charging home for the win in the final.

“I was really pleased with my performance,” he says. “I executed my game plan and technical focus throughout the entire day. I fought hard through the five rounds winning each.”

Racing continues in Lenk on Friday with another Europa Cup.

Jamie has been following the Audi Ski Cross World Cup tour this season with his best result so far a fifth place finish in Arosa, Switzerland. The tour resumes on 3 February at the German resort of Feldburg. 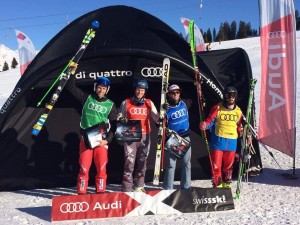