Disappointment for Rebecca Sinclair in Sochi

Having experienced the intense pressure of the Olympic environment once before at the 2010 Vancouver games, Bex was feeling focused and ready for the challenge ahead. Bex had been training consistently well after a long lay-off from injury and with a recent world cup podium under her belt the Olympic build-up had gone well.

The field of 28 riders was split into two heats of 14 with Bex the eighth rider in the first heat. The top three riders in each heat would gain direct qualification to the finals while the fourth through to ninth placed would face semi-final rounds in their bid to make the final 12.  Bex’s strategy was to focus on semi-finals, landing well-executed qualification runs before looking ahead to finals.

Feeling the nerves on her first run, Bex crashed on her ‘crippler’ trick and was unable to complete the run. Her initial score of 32.25 left her in 13th place when all competitors had completed their first runs. With the pressure on to improve her score to within the top nine, Bex re-gathered herself and pushed hard for the big moves.  All went well for the first three hits before she once again crashed out, this time on the backside 540. Bex finished her run and upped her score to 48.25 but by the end of the heat her 11th place was not enough to progress any further.

The day had brought warm temperatures, making for soft and slow snow conditions in the halfpipe and fewer than half the field in heat one had been able to land clean runs.

Asked whether the disappointing result could be attributed to the soft snow or the condition of the halfpipe Tom Willmott replied that this was certainly not the case.

“The halfpipe was in absolutely fantastic condition, the snow was soft but we ride these kinds of conditions all the time and by no means was the condition of the pipe a factor what so ever.

“It’s been described as running a hundred metre sprint along a tight rope; unfortunately today Bex fell off.”

“This is a very disappointing outcome for Rebecca after a strong lead in to the games,” commented Winter Performance Programme Director Ashley Light. “Ultimately the athletes have to land on their feet and today that didn't happen.”

Coach Tom Willmott also added, “I’m proud of Bex for the monumental effort she’s put in over the last four years, to come back from numerous challenges and setbacks, not least her ACL rupture. To get back into shape and to be able to qualify for the games and to be coming in in such good form is a huge accomplishment.” 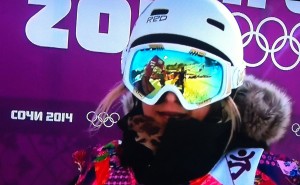