Devin Logan’s score of 84.60 marked a stunning return from a serious knee injury sustained shortly after winning halfpipe gold at Winter Games NZ 2012. In her first competitive appearance since the injury she dropped into Cadrona’s Olympic halfpipe eighth out of twelve finalists, just as the weather closed in. She still threw down a huge run including a left 540 tail, left ally-oop mute, mute grab, right flare safety, left 720 safety with a switch left ally-oop 360 to finish.

“The weather didn't co-operate as everyone had hoped but I'm stoked to be back from my injury and happy to take the top spot. Feeling good!” she said.

Top women’s qualifier from yesterday, Angeli Vanlaanen (USA) then had to wait more than an hour before her run but still scored high with 80.00, enough for silver. Mirjam Jaeger (SUI) took bronze with a solid run of 74.80.

Describing conditions as ‘pretty tough’, he was happy that the competition was completed. “It feels pretty good. I didn't really expect anything this cool, but it's definitely a good start for the season and I'm happy. I'll take it!” he said.

New Zealand’s Lyndon Sheehan couldn’t quite repeat his second-highest qualifying run from yesterday and just missed out on a medal, finishing fourth with 76.4. Fellow Kiwi, Beau-James Wells took a fall in his run and finished eleventh, one place ahead of 2011 AFP World Tour overall champion, Justin Dorey (CAN).

Across the hill on the slopestyle course, it was a training day for elite snowboarders including USA’s Shaun White. Head judge, Iztok Sumatic from Slovenia said he was looking forward to an awesome competition that was wide open.

“There are probably between ten and fifteen riders who will contest the podium. That’s great for the event and great for the sport,” he said.

A complete list of today’s results is available from http://wintergamesnz.com/results. 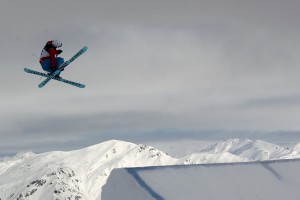