The Snow Sports NZ Junior Alpine Development Camp was funded by The Snowvision Foundation, a Charitable Trust which supports New Zealanders on snow, and managed by Snow Sports NZ Alpine Manager Ian Mclean. The athletes, aged 13- 16 years, were selected on the basis of their 2013/14 results, physical benchmark testing data and a letter of recommendation from a club or training provider or programme head coach.

“The athletes are required to be really strong skiers with good technical ability before they come to camp,” explains Snow Sports NZ’s Ian Mclean. “The technique we’re looking to develop is really no different to the technique the top world cup skiers work on.”

New Zealand born Chris Knight has worked with the US world cup team for 12 years and has coached some of the world’s best female ski racers including Olympic gold medallists Lindsey Vonn and Julia Mancuso. Taking a training camp for development level athletes back in his home country isn’t something Chris has done before but was nonetheless a project he was more than happy to lend a hand to.

“I’ve never worked with New Zealand kids before,” explains Chris. “Ian Mclean asked me if I’d be interested and I said I would. I’m definitely interested to see what’s out there in terms of New Zealand talent and to see whether things are heading in the right direction, whether the skills are at the level to take these athletes to the top.”

According to Chris, “the potential is definitely there.”

“There’s a lot of talent in this country, we have great mountains and opportunities to ski. It’s about bringing everything together: good coaching, the right training opportunities and the right approach to physical and mental skills training. Camps like this make a huge difference. I’m more than happy to be working with these kids and helping them out.”

According to his own research Chris also strongly believes that the 12-16 year old age group is the key stage for talent development.

Queenstown’s Alexandra Hull, one of the youngest participants at age 13, described her experience of the week-long camp as “an amazing opportunity. I’m enjoying the challenges and focusing on improving my overall knowledge of skiing.”

Invercargill’s Elizabeth Reid (16) said that the camp and Chris Knight’s coaching were helping her apply new strategies to her skiing.

“Chris challenges you to think differently about your skiing, he gives you good feedback and different strategies to work on.”

Oscar Halliwell (Auckland), a First Year FIS athlete says, “It’s a real privilege to have Chris Knight coaching us. The way he looks at skiing is different, he’s introducing me to new concepts, giving great feedback and sharing insights in to the US team’s training drills and programmes. It’s been super helpful. I feel as though I’ve improved so much in just one week.”

Ian Mclean described the highlight of the camp as “the opportunity to bring such a talented bunch of kids together, to see them really trying their best and some strong talent coming through.

Fiona Stevens, CEO of The Snowvision Foundation, says, “Snowvision is delighted to be supporting this initiative. It’s bringing together the best young Kiwi talent which is incredibly important for the long term development of the sport. To have the skills of Chris Knight and Ian Mclean applied at this level deserves support.”

Snow Sports NZ and The Snowvision Foundation wish to extend their thanks to Formthotics who provided each of the camp’s participants with new foot beds, fitted by trained podiatrists.

For further information on The Snowvision Foundation: www.snowvision.org.nz and www.blackonwhite.co.nz 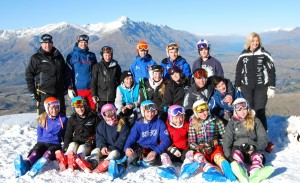