Aspen, USA (24 January 2019) – It’s a case of déjà vu for New Zealand snow sports with Olympic Winter medallists Nico Porteous and Zoi Sadowski Synnott both claiming X Games medals on the same day. The 17-year-olds are in Aspen for the invitation-only event, considered one of the most prestigious on the winter sports calendar.

Porteous was first off the mark today, earning bronze in the men’s freeski halfpipe with Sadowski Synnott landing silver in women’s snowboard big air just an hour later. In February 2018 the pair made history by winning New Zealand’s first Olympic Winter medals in 26 years, claiming bronze on the same day.

Porteous landed his top score of 89.00 on his second run of three, David Wise saving his best for last with a 90.33 on run three, while Ferreira held the top spot throughout the 10-man competition, upping his first run score of 90.33 to 92.66 on run three.

“It was mad déjà vu,” said Porteous. “It hasn’t really sunk in yet, I can’t quite believe it. This comes close to the feeling of an Olympic medal, X Games is such a prestigious event in skiers’ eyes, this is definitely up there.”

Sadowski-Synnott jumped in to the silver medal spot with her last jump of five. The big air format requires athletes to land two different tricks with the combined scores counting for their overall score. Sadowski-Synnott landed a solid first trick with a switch backside 900  which initially saw her topping the score board but went too fast and too big on her next tricks and struggled to get a solid landing down until her very last trick.

"I knew I had to land it to podium and my coach told me to scrub some speed and slow the spin down. By then I knew about Nico's medal and that made me really hyped. From then on everything just started to flow much better."

Sadowski Synnott landed a backside 900 on the last hit.

“It’s a dream come true to get on the X Games podium. I didn’t expect that coming here. I just wanted to put some runs down that I was stoked on and compete against the strongest snowboarders,” she said.

Sadowski-Synnott was named as an alternate for the women’s snowboard slopestyle event, and if gets a start will be in action again on Sunday 7am NZT.

Earlier today NZ’s Finn Bilous missed out on qualifying through to finals of the men’s freeski slopestyle, finishing in 10th place. Carlos Garcia Knight did not compete in men’s snowboard big air after a crash in practice but is due to start in snowboard slopestyle tomorrow (Saturday NZT). 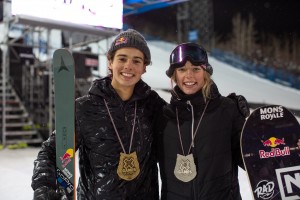