Canmore, Alberta (Monday 17 December 2012) – New Zealand cross-country skier Andy Pohl can be proud of his recent performances at the Alberta Cross Country World Cup in Canada where he achieved a personal goal of skiing within 10% of the world’s best skiers at the world cup level.

Andy finished 50th in the Canmore World Cup 15km Classic Mass Start on 13 December; an amazing result for a New Zealand skier particularly given that when competing on the international cross-country circuit New Zealand skiers do not have access to coaches, technicians and other support staff.

Starting in bib number 67 out of 67 and with FIS points some 20 points greater than the next slowest seed, on paper Andy looked to be by far the slowest skier in the field.  “This made me extremely nervous heading into the stadium, I was sure I was going to get dropped from the pack and end up skiing the entire race alone and in last place,” Andy recalls.

Luckily this was far from the case. Andy had a solid start, maintaining contact with the main pack for most of the first lap.  As the race progressed the tough Canmore hills took their toll and, like many others, he fell off the back of the main pack.  However, by the third lap Andy found himself steadily picking up others who were rapidly fading and would finish strongly for 50th place, 9.66% behind the winner Tim Tscharnke from Germany.

“I was rubbing shoulders with some of the best full time athletes from North America and other nations, which, given my position as a full time student, is something I am very proud of,” says Andy.

After a few days’ recovery time Andy took the start line once again for the Canmore World Cup 30km Pursuit on Sunday 16 December. Once again, Andy put in a strong performance and was pleased with his result. “It was a great race for me, possibly my best yet.”

“I got off to a solid start and settled in behind a good friend and Snow Farm regular Brian McKeever of the Canadian team for the classic leg; however, he made a move near the end of the first 15km which I simply couldn't hold onto. This left me skiing with Callum Watson of the Australian team and a group of about five others for the majority of the freestyle portion of the race (the second 15km).

“Near the end of the race the attacks became more frequent but luckily I had the strength to hold on and finish 44th.”

Next up on Andy’s agenda is the World Championships in February.

“I’m super fired up to see what I can do if I manage to pull enough funding together to get to the world champs.” 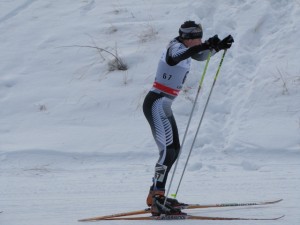