Obergurgl-Hochgurgl, Austria (25 March 2017) – New Zealand skiers were showcasing their talents on the international freeride circuit over the weekend with Craig Murray (Wanaka) winning the Freeride World Qualifier tour event in Austria on Sunday, and Sam Lee (Wanaka) earning his first Freeride World Tour podium with a third place in Alaska on Saturday. A strong season of results means both skiers have qualified to compete on the 2018 Freeride World Tour (FWT).

Craig Murray’s win in Obergurgl-Hochgurgl, Austria, was his second victory in a four-star World Qualifier Tour event this season. (Events on the world qualification circuit are ranked1-4 stars, with 4 representing the highest level of competition.) He also won the Big Mountain Hochfugen in Austria in January.

“I can’t believe it,” says Murray of his recent win and subsequent step up to the FWT level.

Despite variable snow conditions, Murray put together a well-controlled, fluid run, making made good use of the natural terrain.

“I stayed relaxed in the start gate and tried to flow down, linking up a few fun features,” he explains. “I was really stoked to stay on my feet and get such a high score.” 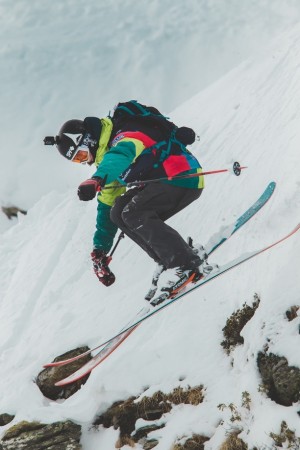