“This is such a cool way to finish off the 2015/16 World Cup season with another gold in the final super-G giving me the overall title,” says Peters. “It was a tight race with only 0.28 seconds in it, the course set was a challenging one but it made for some great competition.”

Peters, who is also the reigning World Champion in the super-G, finished today’s race ahead of Austria’s Roman Rabl in second and Japan’s Akira Kano in third. On overall rankings, Roman Rabl finished second and Andrew Kurka (USA) third.

After finishing just shy of the podium in yesterday’s super-G, Cardona NZ Adaptive Ski team mate Adam Hall also put the hammers down today and finished joint third with Australia’s Mitchell Gourlay in the men’s standing category. Both skiers stopped the clock in a time of 1:23.68s.

This then put the two in joint second place on overall rankings based on World Cup points. IPC rules meant that Gourlay, who has achieved more World Cup wins over the course of the season, was awarded second place, Adam Hall third. Markus Salcher (AUT) was the overall winner and also claimed gold in today’s race. Martin France (SVK) won the silver medal in today’s race. 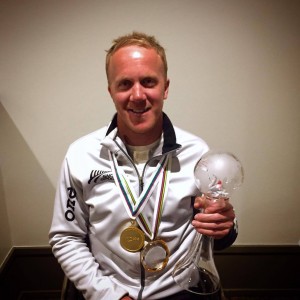