Sochi, Russia (15 March 2014) – New Zealand sit skier Corey Peters returned to the slopes of the Rosa Khutor Alpine Centre on Saturday for the NZ team’s final event of the Sochi Paralympic Winter Games. Having performed well above his world ranking with a sixth place finish in Super-G and a fourth in the Super-Combined, Corey Peters was looking for his best performance yet in his favoured event, the Giant Slalom.

The Giant Slalom (GS) features wider, but fewer turns than the Slalom. Medal places are contested over two runs but a skier must successfully finish their first run to qualify for the second. Corey Peters was the third racer to start in men’s sitting class.

World number one Switzerland’s Christoph Kunz and Canada's Josh Dueck, winner of the previous day’s Super-Combined, were picked as names to watch.

First sit-skier to race, Austrian Roman Rabl set the time to beat of 1:18.87 but the Kiwi flew calmly past, claiming the top spot with his time of 1:18.10. And there Corey Peters remained at the end of run one. Josh Dueck had crashed out, Christoph Kunz sat close on Corey’s heels, 0.53 off the pace with Roman Rabl 0.77 back in third and world number two Georg Kreiter 1.06 off the lead in fourth.

The podium felt tantalizingly close but the pressure would be on. In a sport where even the slightest mistake can mean failure to reach the finish gates, Corey would have to make it home with another exceptionally fast time to guarantee a medal.

The second course was set and racing got underway for run two. In alpine ski racing the top 15 racers from run one start in reverse order, so Corey would be the last racer to start.

Fourth placed skier from run one, Georg Kreiter took a tumble after catching an edge putting him out of the running. Roman Rabl followed next with a no holds barred approach, speeding down the course managing to hold on to every high speed bump and turn. Christoph Kunz followed with a more conservative style but was fast enough to take the lead.

Last to take to the course and with a Paralympic medal on the line, Corey Peters laid down another convincing run, speeding through the finish gates 0.47 off the leader and fast enough to claim the silver medal.

“I’m pretty blown away really,” exclaimed Corey after the race. “To be at my first Paralympics and come away with a podium… Talk about leave the best to last. I’m really stoked with my achievement.

“You can never really expect the podium at this level but I knew I skied well yesterday and it was just a matter of getting a good night’s sleep and repeating it the following day which I’ve definitely done.

“Giant Slalom is the event I’ve had the most success with this season so it’s definitely my strongest event and I was confident coming into it knowing I can ski as fast as these guys.”

Corey described his first experience of the Paralympic Winter Games as “phenomenal. It makes it even more special coming away with a medal. Even if I didn’t have a medal I’d still be stoked but this is just the icing on the cake.”

“They guys have kept us on edge all week but all the hard work has come to fruition at last.

“Expectations for Corey were top 10 and for him to go and get that silver medal is just a fantastic result.

“Everyone was feeling really confident after yesterday’s result in Super-G. Corey especially just knew what he had in him and just put down the most amazing first run to put himself in contention. We’re absolutely thrilled for him.”

If you missed any of the action from the Sochi Games, you can watch replays of the NZ team’s runs as well as athlete interviews atattitudelive.com/paralympics. 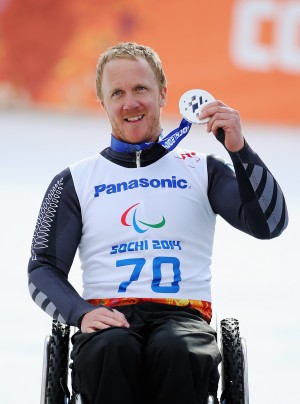