Corey Peters has delivered a bronze medal for New Zealand on the first day of competition at the PyeongChang 2018 Paralympic Winter Games. The sit skier finished the Men’s Downhill Sitting competition in a time of 1:26.01, 1.9s behind gold medallist, Andrew Kurka of the USA and 1.64s behind silver medallist, Taika Morii of Japan. The tough course saw 6 DNFs amongst 26 competitors.

Peters said: “It is such an amazing feeling. After dislocating my shoulder six weeks ago and to now be back on the podium at a Paralympic Games is a dream come true. I’m pleased I did not keep everyone waiting like Sochi where I medalled on the last day of competition. It’s great to get a medal on day one.”

He continued: “It was fantastic to have my Dad here, he will be super proud. To all those family, friends and supporters watching me live back in New Zealand you have helped me more than I ever could have hoped. I would not be here without all the support and coaching. This is my way of repaying them. Now I can just focus on skiing well and build momentum into tomorrow and the Super-G event. I’ll be giving it 110% again.”

The New Zealand flag bearer from last night’s Opening Ceremony delivered a stupendous run sixth out of the gates, which saw him initially sitting in silver, before dropping into the bronze position a few runs on. Thus, began a nervous wait for Peters, as he sat in the winner’s box as another 18 competitors took to the slopes, aiming to knock him out of his third place spot. Tension ratcheted up to its highest when the Polish competitor, Igor Sikorski, set faster sector times through the top of the run, but a heavy slide put him out of contention and Peters only had another two competitors to wait out.

Peters bronze medal is the latest in his medal cabinet, after a silver medal in Sochi 2014 in his favoured Men’s Giant Slalom, which Peters has yet to contest at these Games.

The result came hard on the heels of a fantastic 5th place from veteran Para alpine skier Adam Hall, who beat out a very strong field of 29 competitors in the Men’s Downhill Standing. Initially sitting in the bronze medal position, Hall slipped out of his original 3rd place podium position into 5th place overall, which he held for the rest of the competition. The incredibly tough course claimed a number of casualties, with 5 DNFs. Hall finished in a time of 1.27:52, 2.07 seconds behind eventual winner, Theo Gmur of Switzerland. Hall entered the event ranked 7th in the world.

Hall said: “It went really well today and I’m happy with my run. We were lucky to be able to get the Downhill underway today. It has been really warm so the conditions where pretty slushy, everyone has done a great job to maintain a world class track. For us the way we approached today was just like any another race. However the great thing about the Paralympic Winter Games every four years is we get to show case to the rest of the world what we do day in and day out, and what we are capable of.”

When Hall was asked how he felt to be competing at his fourth Paralympic Winter Games he said: “It is an amazing honour and privilege to be out there for my fourth Games and to put on the black jacket and silver fern. It’s incredible to be here representing all New Zealanders.” 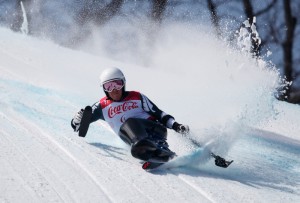