The announcement came as the New Zealand flag was officially raised in the Paralympic Athletes’ Village. The 10-strong Team of three Paralympians and seven support staff become the latest additions to an expected global contingent of 670 Para athletes from 45 countries, gathering to compete across six Para sports. The New Zealand Paralympic Games Team will be chasing a target of two medals across two of the six Para sports.

The 34-year-old sit skier from New Plymouth is currently ranked 3rd and 8th in the world for Men’s Super-G Sitting and Downhill Sitting respectively and was overwhelmed to be named. He said: “I feel so privileged and humbled to be named as the flag bearer for the New Zealand Paralympic Team. I am so excited to lead the team and to know that all our supporters, especially my family, are watching us back in New Zealand will make the honour extraordinarily special.”

Peters will contest five events in PyeongChang including the Men’s Super-G Sitting, Downhill Sitting, Super Combined Sitting and Giant Slalom Sitting. He will not only lead the Team into the Olympic Stadium on Friday, he will also be the first to compete on Saturday along with team mate Adam Hall in the Downhill event. Peters has his sights set on a podium finish after a series of exceptional results including a gold and two silvers at recent World Cups in 2017 and two silvers at the 2017 World Para Alpine Skiing Championships.

Ashley Light, PyeongChang 2018 Chef de Mission, said: “I could not be prouder to announce Corey Peters as the New Zealand flag bearer. Corey epitomises everything an elite NZ athlete stands for, he is a truly inspirational role model.  For both Para athletes and able bodied athletes.  He continually seeks the one percenters to stay ahead of the field he gives everything he has on the slopes.  He goes above and beyond in his local community as well. As an ambassador for Para sport through his professionalism and performance focus, he is simply outstanding. Despite some injury niggles, all going well, Corey is on track to be one of New Zealand’s stand-out performers during the PyeongChang 2018 Paralympic Winter Games.”

The Opening Ceremony of the PyeongChang 2018 Paralympic Winter Games will take place on Friday midnight 9 March (New Zealand time), with live coverage beginning at midnight on DUKE. Viewers can watch all the action during the Games live, free and HD on TVNZ DUKE from 9 – 18 March 2018. Further details https://www.tvnz.co.nz/shows/pyeongchang-2018-paralympic-winter-games 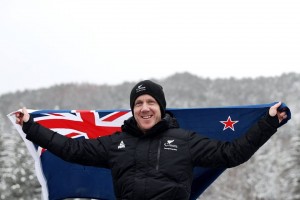