There’s no doubt 2014 will be a year to remember for Para-Alpine Skier Corey Peters.

On top of claiming a Silver medal at the Sochi Paralympic Winter Games, Corey (31) took out the Sport Performer of the Year Award at the 2014 Attitude Awards on December 3 – World Disability Day.

In its seventh year, the national awards celebrate the excellence and achievements of Kiwis living with a disability. This year’s winners (full list of winners below) were announced at a black tie gala held at Auckland’s Viaduct Events Centre and hosted by TV news presenter Simon Dallow.

The Awards have grown out of the Attitude TV series, which screens on TV ONE on Sunday mornings at 8.30am. The overall Attitude ACC Supreme Award was taken out by champion Paralympic swimmer Mary Fisher (21).

Attitude Awards Trustee Dan Buckingham, a member of the elite national wheelchair rugby team the Wheel Blacks, says the Awards are about raising expectations around what is achievable for people living with disabilities.

“Last night we celebrated winners across a range of categories, but really the aim of the Awards is to change peoples’ perceptions about this broad and diverse sector of society. So in that sense, all 24 finalists are winners and fantastic role models,” he said.

The Sports Performer of the Year category is sponsored by Invacare New Zealand. Geoff Purtill, Managing Director of Invacare Australia and New Zealand, says Invacare is honoured to be involved in recognising the sporting successes of all the nominees.

“Congratulations to Corey and to all the Attitude Sports Award nominees who have shown exceptional determination, dedication and put in hard yards to get them to the top of their chosen sporting endeavours,” he says.

Before his accident, Corey was a keen sportsman participating in rugby, cricket, surfing and motorcross riding. But in 2009 his life was turned upside down when he crushed his spinal cord in a motorcross accident and became paralysed from below the waist.

A testament to his determination, sport has remained a big part of Corey’s life. As well as winning the Silver medal at his first winter Paralympics this year, Corey also took home a Silver at the International Paralympic Committee (IPC) Alpine Skiing World Cup in Copper Mountain, USA.

Last year he dominated during the IPC Alpine Skiing World Cup bringing home a Gold medal, three Silvers and a Bronze and went on to achieve tenth place at his first IPC World Championships.

To add to his achievements, this year he was named the Overall Athlete of the Year by Snow Sports NZ. He now has his sights set on the 2015 World Championships in Canada and the Winter Paralympic Games in 2018.

“It’s exciting to be recognised for my achievements for this season,” he says. “It’s a good indication that I’m on track in terms of my skiing career.”

Chief Executive of ACC Scott Pickering says ACC is proud to be principal sponsor of the Awards for the seventh year running, including sponsorship of the Attitude ACC Employer Award and the Attitude ACC Supreme Award.

“Congratulations to all the 2014 Attitude Awards winners. They are high achievers and their determination and spirit is inspirational.” 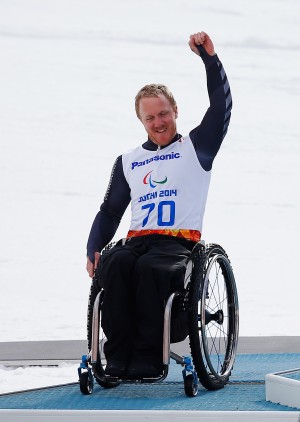