Today was not Peters’ day as he recorded a DNF in the Men’s Giant Slalom Sitting. Peters explained:

“The course was set really tight, some of the gates were set 23, 24 metres. When you’re on a 30-metre radius sit-ski it makes it a little bit trickier, just to try to get the ski to bend through those tight turns. I got rotated through the turn and the tail of the ski washed out. I’m disappointed as I know I can ski better than that and I didn’t manage to put it down today.”

Nonetheless Peters is going home on a high, having got what he came for, and more.

“The goal coming in here was 100% success rate games versus medals, and I achieved that… We always work towards becoming a Paralympic champion. It took me 11 years, but I managed to achieve that goal.”

Peters was the first New Zealand medalist at the Beijing 2022 Paralympic Winter Games, getting the New Zealand Paralympic Team on the medal table with his gold medal in the Men's Downhill Sitting on day one. He followed it up on day two with a silver medal in the Men’s Super-G Sitting, calling the double medal haul in his favoured events “a lifetime career achievement”.

Peters previously won silver in Sochi 2014 and bronze in PyeongChang 2018, bringing his total medals now to four: one gold, two silvers and a bronze.

Peters is now looking forward to “letting his hair down” and enjoying his final days in Beijing.

“When you’re racing it’s hard to soak it all in. Now I can enjoy watching Adam and Aaron finish off the remaining event. Hopefully we come away with a fourth medal with Adam’s favourite event being the Slalom.”

The event which Peters is looking forward to enjoying as a supporter is the Men’s Slalom on Sunday, scheduled for 1.30pm and 5.30pm NZT. New Zealand Paralympians Adam Hall and Aaron Ewen will compete, with Hall being a medal favourite in the event. 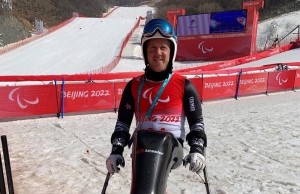