Innerkrems, Austria (14 January 2017) – NZ Para alpine skier Corey Peters (New Plymouth) added to his World Cup medal collection overnight, claiming silver in the Super-G at the Austrian resort of Innerkrems where the first World Cup speed races of the season are being staged.

The schedule has been subject to change, firstly due to heavy snowfalls, and today with high winds forcing the cancellation of one race.

Sit skier Corey Peters, who is the current World Champion for Downhill and Super-G, put together a strong performance but finished 0.62 seconds behind Switzerland’s Christoph Kunz.

It is Corey’s second podium finish of the week, having won one of two downhill races on Thursday (12 January).

Live results are available throughout at: https://www.paralympic.org/alpine-skiing/live-results.

The World Cups offer skiers the chance to hone their skills ahead of the 2017 World Championships and to gain valuable qualifying points for the 2018 Paralympic Winter Games.

The 2017 World Para Alpine Skiing Championships get underway in Tarvisio, Italy, on 22 January, featuring 140 skiers from 30 countries in the last major competition ahead of the PyeongChang 2018 Paralympic Winter Games 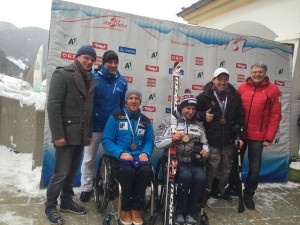