Finn Bilous’ day went from elation to devastation in the space of minutes as the 18-year-old freeskier dropped from 12th to 13th place in the qualifying rounds of the men’s slopestyle in PyeongChang today. Only the top 12 skiers from the starting 30 would progress to final rounds.

Competitors had two runs to earn their top score. Finn started out strongly on run one, laying down a super-clean rail section at the top of the course but couldn’t quite make the landing on the switch triple 1260 on the third jump.

"The first run was going exactly to plan," he explains. "I landed all my rails really well and then had a speed issue on the second jump and didn’t quite land it perfectly. I still went for the triple but didn’t quite have enough speed on it so under-rotated and the pressure was on for run two."

Rather than a problem, Finn saw an opportunity.

"I quite like the pressure. I tend to work well under it," he explains. "As hard as it can be sometimes I find the pressure can really make me push myself in to doing the best tricks I can."

He stepped up for run two and landed a well-executed run for a score of 85.00 initially putting him in to 12th place but with some heavy-hitters still to drop in to the course.

"I'm super-excited to land the run I wanted to, that was an amazing feeling," he said.

However, when Canadian athlete Alex Beaulieu-Marchand came through with a second run score of 94.2 it would mean the end of Olympic competition for Finn.

"I'm absolutely devastated," he said. "I would have loved to have made it through to the finals."

Team mate Jackson Wells had a tough start to his first run when he made an error on the rails at the top of the course.

"On the third feature I had a little too slow speed and just squeezed on to the rail which caused me to slip out a bit," he explains.

"I wanted to clean up the second run but on the first rail I came off on the wrong angle and couldn't quite hit the next feature the way I wanted to."

Jackson knew the judges would penalise the error heavily and continued through the course already with the knowledge that it would be impossible to score the minimum 86 points to squeeze in to 12th place and the goal of progressing through to finals was over.

"I'm really disappointed," he said. "I'm 19-years-old and I'm hoping there'll be other opportunities for me to compete at the Olympics." 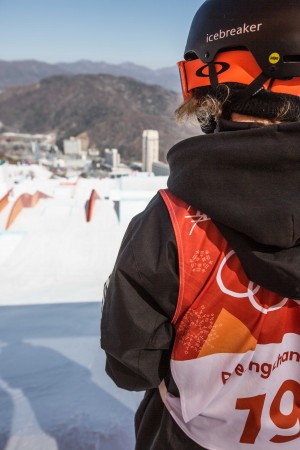