Clear Pathway Ahead for Aspiring Paralympians

The Mt Hutt camp was the last of three camps delivered by Snow Sports NZ as part of its Snow Sports Youth and Women Talent Identification Programme. The programme is supported by the Agitos Foundation and Paralympics New Zealand. The Agitos Foundation is the leading global organisation developing sport activities for people with an impairment as a tool for changing lives.

The aim of the camp was to give the participants clear direction on the competitive sport pathway from starting out as an adaptive snow sports athlete to winning medals on the world stage. As well as coaching the athletes, the camp also provided a mentoring opportunity for coaches new to adaptive snow sports who were able to work alongside experienced coaches.

The athletes - four skiers and two snowboarders - experienced three intensive days of on and off snow coaching, race training and performance planning. The importance of maintaining good nutrition and a fitness regime were also reinforced.

Adam Hall gave an inspiring talk, recounting his experiences from first time skier to becoming a Paralympic gold medallist and emphasised the positive impact the Paralympic movement has had on all aspects of his life.

Carl Murphy, who represented NZ in para-snowboarding at the Sochi Games, was unable to attend this camp due to an injury but has mentored up and coming athletes as part of the Talent Identification and Development Programme at camps held last season.

The camp was also an opportunity for the athletes to be classified to compete at national level events. Classification provides a structure for competition and determines the level to which an athlete’s impairment leads to a competitive disadvantage in sport. The classification system has to be put in place to minimize the impact of impairments on sport performance and to ensure the success of an athlete is determined by skill, fitness, power, endurance, tactical ability and mental focus.

Some of the camp participants will have their first taste of competition and to be classified at international level this season with Snow Sports NZ running IPC (International Paralympic Committee) National Championships and Southern Hemisphere Cups running as part of the Audi quattro Winter Games NZ in August.

“This Agitos Foundation Talent Identification and Development Camps have been vital in providing new athletes with the understanding and skills required to strive towards being future Paralympic representatives and medallists,” says Jane Stevens.

Follow up camps will be held for athletes identified at earlier camps who were unable to participate in last weekend’s camp at Mt Hutt.

“Snow Sports NZ is excited to see talented new athletes committed to following a competitive pathway. We look forward to helping these athletes to achieve their goals and seeing them continue New Zealand’s proud history of success in adaptive snow sports.” 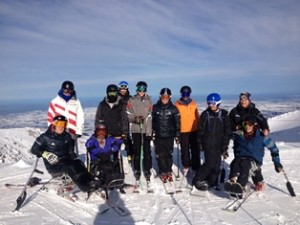