Keystone, USA –(6 April 2014) – New Zealand snowboarder Christy Prior has won the Community Cup Slopestyle event at Keystone resort in the US also picking up awards for best method and best rail trick.

The Community Cup, the only event in the world recognized as a 5-Star women’s snowboarding event, comprised 30 professional snowboard athletes from around the globe, including 15 2014 Sochi Olympians competing in Slopestyle and Big Air.

Šárka Pančochová of the Czech Republic took second in the slopestyle event with 2014 X Games slopestyle gold medallist Silje Norendall (NOR) in third.

Christy, who placed second in the 2013 Community Cup, was excited to have stepped up her performance to claim the win against a world-class field this year.

“I’m so stoked on such an amazing day riding with all the ladies,” she commented. “I’m even more stoked to come out on top and humbled to stand next to these legends on the podium: Silje Norendall and Šárka Pančochová.”

New Zealand’s Stefi Luxton made a last minute call to compete in the Community Cup despite a broken elbow and was pleased to finish in eighth place.

The weekend also saw some of the world’s best young snowboarders in action and another Kiwi on the podium on the final day of the 2014 VÖLKL WORLD ROOKIE FINALS in Austria. 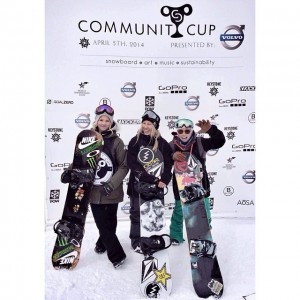