Competitors were challenged by the changing weather situation with the wind going up and down and an overnight cold snap making for an icy course.

Christy Prior had put together a stunning performance in Friday’s qualifying rounds, earning the top score by making best use of the unique course with its technical rail features and unusual twisted side-hits on either side of the final jump. Her run had included back to back 720s on the jumps, a personal best performance.

Using the same trick combo on the first of her three runs in the finals, Christy earned a score of 66.68. The score was solid but nowhere near the 90.00 points she’d earned in qualifying and she knew that a step up run would be required.

Her fellow competitors were also struggled with the conditions, Olympic gold medallist Jamie Anderson (USA) only managing a 62.40 on her first attempt and Karly Shorr (USA) 70.10.

It was a tough battle and Christy worked hard to execute her step up manoeuvres but it wasn’t to be and her first run score would stick.

Jamie Anderson scored a 81.25 in her third and final run to take home the glory relegating her teammate Karly Shorr to second and keeping Christy Prior in the bronze medal spot.

“There are definitely areas for us to work on to ensure we can be more robust in two years’ time. We now have really clear direction about where we’re doing well and where we can make gains.” 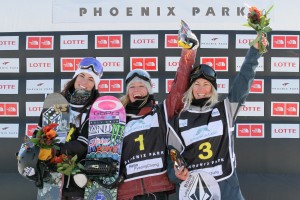