Christy Prior Second at Laax Open

LAAX, Switzerland (23 January 2016) - NZ snowboarder Christy Prior (Kaukapakapa) has made a strong comeback from injury finishing second in slopestyle at the 2016 Laax Open in Switzerland this morning. With the women’s field stacked with the biggest names in slopestyle today and competition initially delayed due to bad visibility and strong winds, Christy had her work cut out for her.

The skies eventually cleared to a beautiful final day of competition and the six female finalists had three runs to give it their best shot.

Christy struggled with speed on her first run and misjudged the first jump, coming up short and not making speed for the second jump. Keeping the nerves in check, she pulled out all the stops on her second run which consisted of a cab board slide to regular, nollie back 180 over the wave, cab under flip 5, frontside rodeo 720, backside 540, a pop tart (switch to regular) on the quarter pipe and front board on the last rail. She was rewarded with a score of 71.80 which would see her finish second to Olympic gold medalist, Jamie Anderson’s with a first run score of a 81.10.

Anderson showed everyone why she was recently named Snowboarder Magazine’s 2016 Women’s Rider of the Year, landing the cleanest run of the day, complete with a backside blunt 270, backside 540 and a frontside 720 mute.

It was all about Canada in the men’s finals, with five riders ending up in the top spots. Fivetime X Games gold medalist and 2014 Olympic bronze medalist, Mark McMorris, kept it interesting, with a scary fall on his second run, but was able to come back and stomp his third taking the win, with a score of a 91.40. 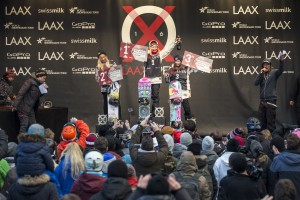 6 years ago
Christy Prior, Laax Open