Aspen, USA (25 January 2015) – Cardrona NZ snowboarder Christy Prior has this morning claimed New Zealand’s second medal at X Games 2015 with bronze in the women’s slopestyle. The result comes off the back of Carl Murphy’s silver medal in adaptive snowboard cross on Saturday.

Competing at her first X Games against the very best female riders in the world including nine-time X Games medallist Jamie Anderson (USA), Christy Prior certainly had her work cut out for her. The competition format allowed each rider three runs to put down their highest score and for the Kiwi rider it would be a matter of saving the best for last.

The first run started out well for Christy with clean moves through the rail section but she would come unstuck on the backside seven trick on the first jump.

“That really spooked me,” admits Christy. “Coming into the second run I was a bag of nerves.”

The nerves got the better of her and Christy took a fall on the rails leading into the first jump on her second run.

Meanwhile, some of the more experienced riders were posting top scores and impressing judges with their progressive runs. Canada’s Spencer O’Brien had landed the first 900 in X Games women’s Snowboard slopestyle history and was sitting in third place with a score of 87.33 behind Jamie Anderson and Silje Norendal of Norway.

A change of mind set was needed for the Kiwi.

Christy explains: “I thought to myself, I’ve got nothing to lose. I’m proud to be here riding alongside the best in the world. What would I be most stoked with at my first X Games? I knew it would be to land the backside 7 in competition.”

“The backside 720 is a new trick for Christy that we’ve been working hard on in training,” explains her coach Sean Thompson. “She was dealing with the nerves and managed to get herself in the zone and put the trick down on the last run.”

With one last chance to nail a high score Christy once again started out strong on the rail section, landed clean and continued through the course to line up the backside 720 for the second of three jumps. This time everything came together, Christy landed her new trick and finished off with a frontside rodeo 540 on the final jump.

Her score of 89.33 would move her into third place but with a nervous wait to see if O’Brien could bump up her own third run score and claim back her podium spot. The Canadian rider couldn’t deliver, crashing out of contention and having to make do with fourth.

“It’s hard to comprehend right now. I’m here at X Games as a rookie and to win a medal is a really special thing.” 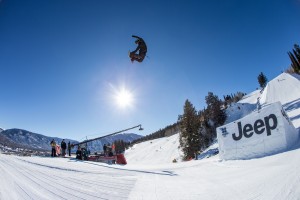