After taking up snowboarding in her late teens, slopestyle and big air specialist Christy Prior charged her way to the top of the sport to become one of New Zealand’s most successful ever snow sports athletes and highly respected on the world stage. She is a five-time World Cup medallist including two World Cup gold medals, X Games silver and bronze medallist, Dew Tour bronze medallist and a five-time Burton Open medallist including winning the 2015 Burton European Open. Christy was named Snow Sports NZ Snowboarder of the Year in 2013, 2014, 2015 and 2016.

“Christy was at the forefront of taking New Zealand snowboarding to the world stage,” says Snow Sports NZ High Performance Director, Nic Cavanagh. “As an athlete she has stood out from her peers with her determination and work ethic and has inspired the next generation of NZ snowboarders to take on the world and win.”

Christy was named to the New Zealand Olympic Winter team for the 2014 Sochi Games and competed in the qualifying round, but an injury sustained during semi-finals warm-up put her out of competition.

She was quick to bounce back, however, and charged through the 2015 northern hemisphere season, claiming career-best results including her win at the prestigious Burton European Open ahead of the 2014 Olympic gold medallist Jamie Anderson (USA) and Olympic silver medallist Enni Rukajarvi (FIN).

The 2015/16 season saw Christy once again back on top form, scoring a Slopestyle bronze as an X Games rookie and becoming the first female from New Zealand to medal in an X Games winter event. She also scored Big Air silver at X Games Oslo in 2016.

The same season Christy claimed World Cup bronze in PyeongChang, Korea at the test event for the 2018 Olympic Winter Games.

A knee injury meant Christy would spend 18 months on the sidelines, resulting in a late start to her 2018 Olympic Games qualification campaign. Christy returned to snow in September 2017 and soon looked to be on track to meet the qualifying criteria with promising results including a bronze medal at the Monchengladbach Big Air World Cup in Germany, and gold in Slopestyle at the Aspen Snow Mass World Cup in Colorado, USA.

She gained conditional selection to the Olympic Team subject to qualifying a nation's quota spot. Unfortunately, the last World Cup before the 2018 Olympics and the last stop on the Olympic qualifying tour was snowed out and cancelled at the last minute. This meant Christy missed out on what would have been a likely qualification berth and a top pick for an Olympic podium.

Although Christy has retired from the World Pro Tour and the New Zealand Snowboard Team, she is still contracted to sponsors outside the NZ team and continues to represent them via team trips, film and photoshoots, and certain content creation events like Ms Superpark. She hopes to make a couple of trips to the Northern Hemisphere winter for some more time on snow, filming, and sponsorship obligations. Christy will take part in the new Winter Games NZ Obsidian event this year “for a bit of fun and to try out the new creative layout of this contest.”

Dunedin is now her main base but Christy still spends the most part of New Zealand winter in Wanaka snowboarding, teaching yoga and snowboard yoga retreats.  A dedication to yoga and meditation has not only enhanced and complemented a successful competitive snowboarding career but has now provided a new career pathway. Alongside running two small businesses, and being a professional snowboarder, Christy is a 500-hour qualified yoga teacher and offers online yoga and coaching sessions via zoom and runs private yoga classes from her Dunedin studio. She also enjoys time surfing and getting away on van trips whenever she can.

Snow Sports NZ wish Christy all the best with the next stage of her career and look forward to seeing her back in action at the Obsidian in a few weeks’ time! 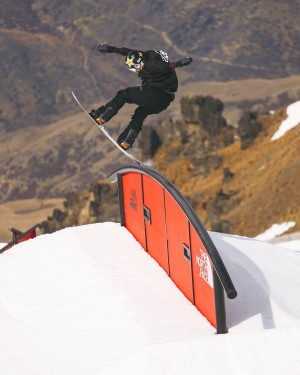