Utah, USA (25 February 2015) – Snowboarder Christy Prior (Kaukapakapa) and freeskier Janina Kuzma (Wanaka), both members of the Cardrona NZ Park and Pipe team, have qualified for finals in their respective disciplines at the Sprint US Grand Prix currently taking place at Park City Mountain Resort in the U.S.A.

This is the final stop on the three-stop tour which has attracted a field of top ranked international freeskiers and snowboarders. The freeskiing events at Park City are sanctioned as World Cups by the International Ski Federation (FIS) and Platinum level events by the Association of Freeskiing Professionals (AFP). The snowboarding events are also FIS World Cups as well as World Snowboard Tour International Level events.

With strong winds a factor in today’s qualifying rounds both Janina and Christy opted to put down safe runs, good enough to place within the top six and progress to finals but with plenty still left in the tank for finals day.

In the women’s freeski halfpipe Janina landed her first run but missed the grab on her alley oop trick. She tidied things up on the second run, locked in the grab and landed a clean run for a score of 79.00 and fourth place. Maddie Bowman (USA) was the day’s top scorer with 86.60 with Japan’s Ayana Onozuka just behind with 83.80 and Sabrina Cakmakli (GER) third in 81.00. New Zealand’s Britt Hawes finished in 13th place.

Christy Prior achieved her best result of the day with her first run in the women’s snowboard slopestyle qualifiers, scoring 78.25 and also placing fourth. She put together a well-executed rail run at the top of the course but lost points for putting her hands down on the jumps. Canada’s Jenna Blasman was the top qualifier with her score of 84.25, Cheryl Maas (NED) second with 81.75 and Sina Candrian (SUI) third with 79.50.

Today’s competition also saw some of New Zealand’s up and coming snow sports athletes in action. Freeskier Miguel Porteous (Christchurch) put together a personal best run in the halfpipe and achieved his goal of landing back to back double nine hundreds in competition. He was “over the moon” with his eighth place finish in his heat. In the men’s event competitors were split into two heats with the top four from each heat plus the next two top overall scorers progressing to the ten-man final.

The day didn’t go quite so well for Kiwi snowboarder Carlos Garcia Knight (Christchurch) who fell on both runs in the men’s slopestyle.

Jossi Wells finished eighth in his heat in men’s freeski halfpipe, opting not to push too hard in the windy conditions and focus instead on the slopestyle event which will take place tomorrow. Also competing in this event will be Jackson Wells, Hamish McDougall (Wanaka) and Miguel Porteous. 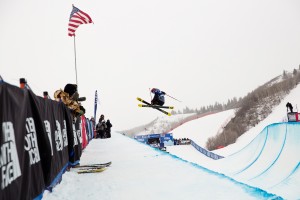