Christy Prior and Janina Kuzma Through to Finals at Dew Tour

Breckenridge, USA (11 December 2014) - Cardrona NZ Park and Pipe athletes have once again held their own against the best in the world with freeskier Janina Kuzma (Wanaka) and snowboarder Christy Prior (Kaukapakapa) both making the cut through to finals on day one of competition today at the prestigious Dew Tour Mountain Championships in Breckenridge in the United States.

Janina was the first of the Kiwis to compete in her discipline of Freeski Superpipe. The semi-final brought together 16 of the world’s top female competitors each taking two runs for the right to move on to the final.

Putting down the same run which earned her top spot at the Copper Grand Prix World Cup last week, but missing some of her grabs Janina earned 75.75 on her first run placing her fourth. Knowing that she could improve on execution, Janina cleaned up the second run to improve her score to 77.00 and hold on to fourth place and her spot in the finals.

The women’s snowboard slopestyle was next on the agenda with NZ’s Christy Prior also looking to stomp her runs and make it through to the final. Once again, the top five were automatically advanced, but that wasn’t the end of the contest by any means.

After a couple of bobbles on her first two runs and placed seventh, Christy’s finals qualification would come down to the wire. With the top five through to finals, the next eight competitors in the rankings then took part in a last chance qualifier – an all-or-nothing opportunity to take one more run through the course. Scores from the semi-final were dropped, and only the rider with the highest LCQ score would earn the last spot in the final.

“Christy rose to the challenge,” explains coach Bud Keene. “Faced with a highly competitive situation she proved she can perform under pressure.”

Showing a good variety of tricks and excellent style, particularly in the mid-course rail section, everything came together for Christy’s third run and she would earn the second highest score of the day along with the coveted sixth spot in the finals.

Beau-James Wells and Byron Wells will compete in men’s Freeski Superipe Semi-finals on Friday US time- 8.00am Saturday NZ time.

Christy Prior will compete in women’s Snowboard Slopestyle Finals on Friday US time -11.00am Saturday US time.

Livestreaming is available at: http://www.dewtour.com/actionsports/live 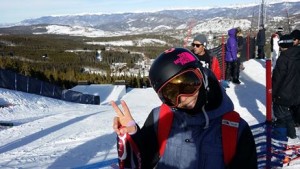