Lake Wanaka, New Zealand (3 September 2017) – The Audi quattro Winter Games NZ action returned to the world-class slopestyle course at Cardrona Alpine Resort today with the who’s who of snowboarding on the hunt for coveted World Cup points. The women were the first to drop into the course this morning and American riders Hayley Langland and Jamie Anderson the top qualifiers in their respective heats.

Langland earned her top score of 92.00 on her second run of two, impressing the judges with her technical rail section. Coming off the back of a strong northern hemisphere season in which she earned a World Cup silver in slopestyle and X Games gold in Big Air, she was always on the one-to-watch list. However, Langland faced stiff competition from Japanese rider Reira Iwabuchi who scored a 90.00 on her first run and 91.50 on her second.

In heat two, Olympic champion Jamie Anderson secured a fast track to finals with a 95.50 from a possible 100 points on her second run of two, the judges rewarding her for the flow and technical merit of her run.

GB’s Katie Omerod also made good use of the creative course, earning second place on the scoreboard to guarantee her place in tomorrow’s finals.

“There’s so many good girls and it’s a challenging course, it’s quite difficult,” said Omerod. “I really like the course. It’s kind of nice when a World Cup is challenging because it really picks out the good riders.”

NZ’s Zoi Sadowski Synnott also secured a spot in the finals after placing fifth in her heat. The Wanaka teenager enjoyed the challenge of competing against a world-class field on her home turf and looked to step up the technical difficulty of her run to lift her score.

“It’s the heaviest field I’ve ever competed with,” said Sadowski Synnott. “It’s a bit nerve wracking but exciting at the same time.

“I landed my first run, my back up run, then went for my second, stepped it up but didn’t quite get it. Everything went really well up until the last jump, I just went way too big on a double wildcat and didn’t stick it.”

Darcy Sharpe of Canada and Chris Corning of the USA were the top qualifiers of their respective heats in the men's qualifying rounds held this afternoon.

Warm sunny conditions had the snow softening and the course running slow, with several of the top ranked riders coming unstuck on their first of two runs.

Chris Corning smashed his top scoring run right out of the gate, scoring a 90.75 on his first run. His run was well executed top to bottom from rails to the jumps with high level of trick difficulty and good variety.

“It’s super sugary out there and it was good just being able to put a run down," said Corning. “It wasn’t exactly what I wanted but it was good enough to get a score of a 90.00.”

Darcy Sharpe took a fall on his first run but was able to make an impressive comeback, landing a very technical, near flawless run on his second go.

After struggling on his first run, NZ’s Carlos Garcia Knight was also able to adapt his run to the conditions and put down the second highest scoring run in heat one. The judges rewarded the Kiwi for his technical rail tricks and all round clean run.

“I’m just happy to put down a run,” said Garcia Knight. “I stepped it down a little bit just because conditions were pretty tough today but I guess it worked in the end. I had a pretty strong top section and so that carried me through.”

The Snowboard Slopestyle World Cup finals will be held at Cardrona Alpine Resort tomorrow (Monday) with 16 men and 10 women in action.

The Audi quattro Winter Games NZ snowboard events are jointly sanctioned by the International Ski Federation (FIS) and the World Snowboard Tour (WST). They provide a valuable opportunity for snowboarders from around the world to earn qualifying points for the Olympic Winter Games which will take place in PyeongChang, South Korea in February 2018. 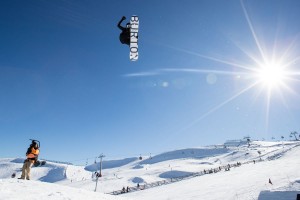