Carlos Garcia Knight Through to Finals in PyeongChang

The New Zealand Team has made an encouraging start to its Olympic campaign with snowboarder Carlos Garcia Knight finishing in second place in the men’s Slopestyle heats in PyeongChang.

Making his Olympic debut, Carlos said, “It’s hard to put words to it. We’ve been so long thinking about this contest and for it to finally be here and to do so well, is unbelievable.”

Competitors had two runs to earn their top score on the six-feature course at Phoenix Park and only the top six competitors from each of two heats would earn a place in the finals. Competition brought snowy conditions, flat light and gusty winds but the Kiwi contingent took it all in their stride.

“We knew the forecast was a bit sketchy but it actually turned out to be better than I imagined,” explains Carlos. “That’s what’s cool about snowboarding, you have to deal with what’s in front of you.”

Carlos earned his top score of 80.10 on his first run, with the judges rewarding him for flawless trick execution in the difficult conditions.

While the course offered several options, Carlos decided to stick with a tried and tested formula using a similar run to the one which earned him World Cup bronze on home turf at the Winter Games NZ in August 2017.

“The strategy was easy. I had a run that I’ve done before, I just made a few minor adjustments, with new grabs and new rail tricks. The plan was to do as best I could.”

The strategy paid dividends with only Norwegian Marcus Kleveland coming away with a higher score and other top ranked riders such as American Chris Corning missing the cut. 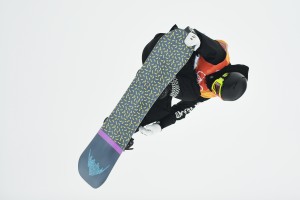