Garcia Knight is the first New Zealand snowboarder to qualify for an Olympic final and says he has mixed emotions about the result.

“It’s bitter sweet for sure. I’m honoured and really excited for the opportunity to be at the finals and to come fifth that’s crazy for me, but also I came here to get a medal and I was so close. If I could have landed that run I would have been in the top three.”

The 20-year-old came tantalisingly close to a podium finish and led the field after the first run, while some of the sport’s heaviest hitters struggled to land clean runs. The 12-man field had three runs to land their top scores on the six-feature course and were challenged by gusty winds.

Carlos explains: “The story was to tell a story with my riding. Do my first run that I did yesterday and get a baseline of where it would score and then step it up and show everyone what I was capable of.

“On the first run I did everything really well, I was super proud of that.”

The planned step up was to increase the difficulty of his trick from a switch back 1260 to a switch back 1620 on the last jump.  Garcia Knight was unable to make a clean landing on his second run and was bumped down to third place with one run left to take.

“The wind was picking up towards the last couple of runs, it was all or nothing, it was hard to get everything perfectly. That plays on your mind a lot. When you are trying your hardest trick you’ve ever done, the last thing you want to be doing is trying to make a decision to see if you can make speed for your jump or not.

“I really wanted to improve on that last jump. I wanted to do a switch back 16 but the conditions and my riding didn’t come together. It was all or nothing really.”

The USA’s Redmond Gerard and Canada’s Max Parrot saved their best for last, going one, two in the medal rankings with Mark McMorris (CAN) rounding out the podium in third. 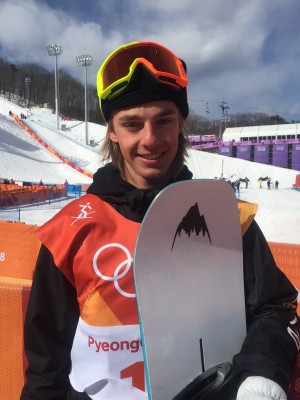