Riders raced head-to-head six at a time in a format which many, including Carl Murphy, have only ever raced at the X Games exhibition races in 2011 and 2012. A maximum of four riders racing head-to-head is the norm in adaptive snowboard cross. A medal winning run down the burly course which featured jumps, berms, rollers and flat sections would be a matter of getting a fast start out of the gates and staying clear of five other riders.

“The semis didn’t quite go the plan,” explains Murphy.

The 12 man field was split between two heats of six with the Kiwi racing in heat two and looking to place within the top three in his heat in order to claim a spot in the finals. Hot out of the gates Murphy took the lead with USA’s Keith Gable and Canada’s Alex Massie right on his heels.

Checking their speed ahead of a tight corner, the three racers ended up tangled together and all three came down. Bouncing straight back up but having to hop up and over the next feature to get back on track and up to speed the race was back on but now with Gable leading, Massie in second and Murphy third and having to put the hammers down in order to qualify for finals. Maintaining his focus, the Kiwi did just that and crossed the finish line safely in third place.

On to the finals and Murphy would once again face off against Gable and Massie as well as long-time rival Mike Shea from the USA.

“I had a really clear idea what I needed to do in the finals and that was to get out in front from the start,” explains Murphy.

“Keith Gable just beat me to it.”

Gable took the early lead but the Kiwi wasn’t giving up and kept up the chase right to the finish.

“I saw an opportunity where Gable made a speed check close to the finish, I went for the gap but was just a little too late.”

“This trip has been a real whirlwind, winning world cup gold and bronze in Canada last week and now a silver medal at X Games to top it all off. It’s really good to know that I can still push it with the big guys even after having time off.”

Murphy has had a seven week break from on snow training, spending time at home in New Zealand following the birth of his second child last month. 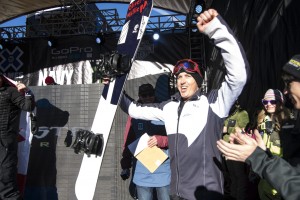