Landgraaf, The Netherlands (23 November 2012) - New Zealand adaptive snowboarder Carl Murphy (Wanaka) is celebrating the best possible start to his northern hemisphere season, standing atop the podium after his first race.

Carl was the winner of the men’s Snowboard Cross in the Lower Limb Impaired category at the first of a two-day IPCAS race at SnowWorld in the Netherlands on 22 November. As the first qualifying event for the Paralympic Games in Sochi in 2014, the race has attracted a strong international field including athletes from New Zealand, Canada, Australia, South Africa and Finland.

The race location provided a novel experience and some unusual challenges for racers. SnowWorld, located in Landgraaf in the Netherlands, is an entirely indoor facility, the largest of its kind in the world. Snow Sports NZ’s Adam Dooney who coaches Carl Murphy explains: “We arrived at SnowWorld in Landgraaf on Tuesday morning and went straight on snow for a training session. The hotel and all the facilities are connected to the snow centre so although we have been snowboarding for the last three days we haven't been outside at all!”

SnowWorld’s facilities include a 530m long snow covered slope, 210m wide with three surface tows and a six-seater chairlift. Being limited for space the course is very tight with features very close together, which would make for some exciting racing.

The format for the Adaptive Snowboard Cross is three individual timed runs with each racer’s best two times combined for their overall result. Depending on the racer’s impairment they race in one of three classes: Upper Limb Impaired, Lower Limb Impaired and Visually Impaired, with both Carl Murphy and fellow Kiwi Byron Raubenheimer (Auckland) racing in the Lower Limb Impaired category.

Carl Murphy, who is currently ranked number two in the world, showed his class by maintaining focus under pressure to take out the win.

"I’m so stoked to finish on the podium in the first race of my 2012-2013 season,” he enthused. “From the moment I woke up I was 110% focused on claiming the gold and after putting down the fastest time of the day in the first run I knew I could do it.  My second run saw me crash out and slip back into about ninth place.  In the third run, I did what I had to and held it together to finish two seconds faster than Canada's Tyler Mosher in second place and Merijn Koek of Holland claiming third.

“My focus now shifts to tomorrow’s day of racing where I want to back up today’s results and once again claim the gold.”

Byron Raubenheimer also demonstrated his significant potential, posting the second fastest time in one run but was unfortunately disqualified after falling on two out of three of his runs.

Snow Sports NZ’s Adam Dooney is pleased with the results, claiming a “great start to the season for both Carl and Byron” and congratulating Carl on “pulling out the win under pressure.”

Racing continues in the same format tomorrow and Dooney is hopeful of another podium finish for the Kiwis.

“Both Carl and Byron are definitely looking strong and in with a shot.”

For Carl Murphy, today’s race result is part of a dual celebration having just heard the news that he will be the recipient of an AMP National Scholarship. The scholarship will assist Carl in his campaign to represent New Zealand at the Winter Paralympics in Sochi, Russia in 2014.

Click here for information regarding the two-day IPCAS race at SnowWorld in the Netherlands: 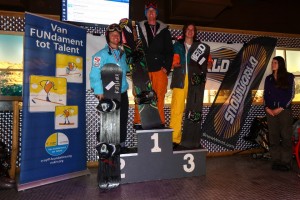