After qualifying through to the finals in third place yesterday against some of the best riders in the world, Cool knew she had to bring her A Game today.

She put down a solid first run with a lip slide on the down rail, a 50/50 wildcat out of the pyramid rail and a 540 over the roller. In the jump section Cool stomped a cab double under-flip and a frontside 720, finishing off with a backside air with a melon grab on the quarter pipe. She was rewarded with a 71.15 and finished run one in 5th position.

Coming into the second and final run Cool knew she needed to step up her first run, and that she did. Upgrading the second jump to an epic frontside double 1080 bumped her score up to a 75.95. This was also the first time she has landed this highly technical trick in competition.

Although Cool stepped up her run, so did the other women on course today, meaning even with an increase in score she remained in 5th place once all the athletes had completed their second run.

Cool’s teammate Tiarn Collins dropped into the men’s Snowboard Slopestyle finals at the same event today after qualifying through in first place. He was looking good on his first run but came unstuck on his 1620 on the first jump.

The pressure was all on for his second run, unfortunately he couldn’t quite hold it together on his 630 out of the pyramid rail, finishing up in 11th place today.

This was the final FIS Snowboard Slopestyle World Cup event before the Beijing 2022 Olympic Winter Games. Cool and Tiarn are yet to be selected to the NZ Team for Beijing 2022, but with a selection imminent in the coming weeks tonight’s results will certainly help their case. 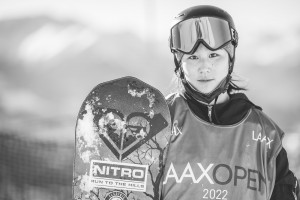