The 20 year old Aucklander - who has only been competing in the slopestyle discipline for one year - is extremely excited by today’s result which will move her another step closer to the ultimate goal of qualifying for the 2014 Winter Olympic Games.

Wind and fog made for extremely challenging conditions in today’s competition and Anna’s coach, Snow Sports NZ’s Peter Legnavsky, says her positive attitude and clever tactics in managing the situation meant that she excelled under pressure.

US skiers claimed the top podium spots with Alexi Micinski in first and Julia Marino second.

Anna will now travel to Valmalenco, Italy to compete in the 2013 FIS Freestyle Junior World Championships from 26-31 March.

In the men’s ski slopestyle event in Sierra Nevada, Wanaka skier Beau-James Wells also made it through to the finals and was able to achieve a ninth place finish. 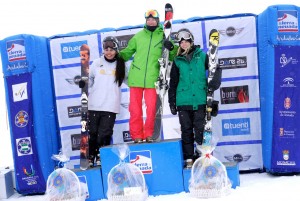