The second leg, and the third competition, of the 2016 Audi FIS (International Ski Federation) Ski Cross World Cup Cross Alps Tour was held as a night time competition under the lights in the Swiss resort of Arosa on 13 December (the morning of 14 December NZT).

“I actually had quite an average qualifying run with a bit of a bobble which I was nervous about,” explains Jamie. Executing his two-part game plan – making a fast start and holding a competitive line on the negative (off camber) turns – would therefore be crucial to improving his performance come finals time.

In ski cross racing the finals are broken down into four stages with skiers racing head-to-head in heats of four. During each heat, the first two skiers crossing the finish line move onto the next heat, while the last two skiers get ranked based upon the qualification times. The so-called big final round, determines the places from 1st to 4th, and the so-called ‘small final’ determines places 5th to 8th. Jamie Prebble was the winner of the small final.

Jamie placed second in his first heat of today’s finals rounds, and moved through to the quarter final, once again finishing in second place in his heat and moving on to semi-final rounds.

“There were some good battles with a lot of contact going into the turns and the starts were really important,” says Jamie.

Battling hard but squeezed out in the final metres, Jamie finished fourth in this semi-finals heat, putting him out of contention for the main final but firing him up for a shot at the small final.

“I had an awesome start in the small finals, moving out in front and I managed to hold the lead right until the end,” he explains.

“It’s my best result in a World Cup and it’s super exciting to put down a result I knew I was capable of. It’s good to be able to compare yourself with the best in the world and achieve a result you can be proud of. It gives me lots of confidence going forward and I can’t wait to race again.”

He won’t have to wait long to do so, with the next World Cup scheduled for Friday 16 December in Montafon, Austria. The inaugural Audi FIS Ski Cross World Cup Cross Alps Tour features six World Cup ski cross events spread across four resorts in four different countries over the course of 15 days. The Tour comes to conclusion on December 20-22 with back-to-back races in Innichen/San Candido in Italy. 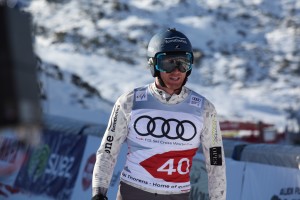