The Junior Nationals run over five days and comprise a variety of disciplines from racing through to park and pipe, and freeride. Competitors have travelled from throughout New Zealand to take part in this long running event which has for many years showcased the talents of young snow sports athletes.

For many it is a chance to try their hand competing for the first time, for others it is a chance to hone their skills and provides a stepping stone to the international stage. NZ Winter Youth Olympian Tiarn Collins (Queenstown) is using the Junior Nationals as a final hit out before heading to the northern hemisphere to train and compete on the World Cup circuit for snowboard slopestyle and halfpipe.

It is Tiarn’s fourth year competing at Junior Nationals and he says it’s the fun, relaxed vibe of this competition which brings him back year after year. A specialist in the park and pipe disciplines, he says he enjoys this chance to test his speed through the race gates and gravity cross course for a change.

“It’s a great way to end the season, bringing a bunch of friends together, having fun and competing for the overall title,” says Tiarn.

The snowboard slopestyle competition was split across two venues according to the age of the competitors. Primary school aged riders and Year 7 & 8 girls competed in the Lil’ Bucks Park while older competitors took on the jumps and rail features in Antler Alley.

Competitors had only two runs to put down their highest score with judges awarding highest marks for smooth, flowing runs. The younger competitors showed a good variety of tricks and the Primary Year 5-6 boys’ category was particularly strong. Wanaka locals Zephyr Lovelock and Campbell Melville Ives went head to head for the top spot. Campbell threw back to back 540s but Zephyr’s switch back 5 shifty proved to be the winning move.

In Antlers Alley most competitors used their first run as the warm up and earned their top scores on the second attempt. Tiarn Collins and Zoi Sadowski Synott (Wanaka), both competing in the Secondary School year 11-13 age groups, were the standout performers.

Tiarn’s winning run included a back 7, front underflip 5, switch back rodeo, front 270 on the first rail, and front lip slide on the second rail, all performed with perfect control.

Zoi had a good first run which would have been enough for the win but the Snow Sports NZ Talent Development Squad athlete knew she had more to give and pushed even harder on her second run. Described as “excellent” by head judge Mike Hijgemann, Zoi’s run was well controlled, clean on the rails and technical on the jumps with good solid landings.

“I was really pleased to put down the run I wanted to and land the combination of back five, front seven to wildcat,” said Zoi. “It’s always a really good vibe at Junior Nationals and everyone’s really supportive,” she added.

In the Salomon Skier-Cross racers first completed a single time trial on the Speed Zone Gravity-cross track. The fastest racers in each age category then moved through to elimination rounds before racing head to head for final positions.

Competitors across several age groups were able to claim wins in both of today’s ski disciplines, putting themselves in a strong position for the overall titles which will be decided when competition finishes on Friday.

Ski racer Ben Richards (Wanaka), who had an impressive northern hemisphere season with medal results at major international events such as the Whistler Cup in Canada and Trofeo Borrufa in Andorra, was one of the standout performers on the race tracks today, winning both the GS and the gravity cross in the male Secondary Year 11-13 age group.

Like Tiarn Collins, Ben is an up and coming snow sports athlete enjoying a fun competition before heading back overseas to resume a demanding schedule of racing on the International Ski Federation (FIS) circuit.

“Today was just really fun. It’s been a while since I’ve competed in all the disciplines as Nationals so I just thought why not,” said Ben. “The season here and overseas was quite full on so it’s good to break it up and do a few different events for a change.”

The week will conclude with a prize giving ceremony at the Lake Wanaka Centre, Ardmore Street, Wanaka on Saturday. Photos and footage will be shown of the Cardrona Junior Nationals event and the grand prizes will be awarded. 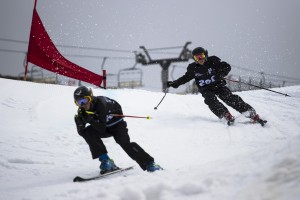