Catch some of the day's highlights here:

Years 1-6 Primary and Intermediate 7-8 Girls competed in the Lil Bucks Park while the older competitors (Year 9-13) contested their two run final on the bigger jumps and rails in Antlers Alley.

“Overall we saw lots of trick progression compared to previous years, especially for the boys and there were some very tight battles for top spots,” said judge Keith Stubbs.

Mila Stalker (Year 5-6) and Cool Wakashima *Year 7-8) were stand outs in the girls’ fields, Mila the only girl to spin a 3 and Cool stomping a clean front 3 to big stalefish grab on the second hit.

Over in Antlers Alley, Cool’s brother, Anru, was on his way to first place in boys’ Year 7-8 with a controlled and smooth run incorporating cab 1, air with nose and tail grab, mute grab, 50-50 onto first rail and 50 front board out on the second rail.

Zoi Sadowki Synott rounded out a successful week by winning the girls’ Year 9-10 age group with riding which the judges described as “very advanced for her age.”

Following a crash in the halfpipe yesterday, Tiarn put his demons to rest by laying down the highest scoring run in the Bonfire Snowboard Slopestyle. His run included a switch underflip into front 7, back 7, front 270 on the first rail, 50-50 back 3 off the second rail.

U18 Open Ski and Snowboard Slopestyle

Introduced as a new event this year, the U18 Open Slopestyle event provided those skiers and snowboarders with high end tricks with the opportunity to showcase their skills on a truly challenging stage. The skiers were the first to tackle the Big Bucks Park and knew that the judges would be looking for technical runs.

Margaux Hackett (France) was the only girl in the field and today was her very first time hitting the big line. She sent it to the moon on the bottom jump but crashed on landing.

Wanaka’s Finn Bilous was the clear winner, starting out with a strong rail run and incorporating multiple doubles in his run. Big brother Hank, a big mountain specialist at heart, put his own unique spin on the park, starting with a fast and fun rail line and stomping the jumps all the way to second place.  Third place-getter Luke Hughes (Auckland) put down a very competitive jump run but lost points for a couple of bobbles on the rails.

The snowboarders moved straight from their age group competition into the Open event. With the snow softening and slowing up the course, speed and confidence became the key to success. Only those riders committed to attacking the course could gain enough air time to pull off technical tricks and nail their landings. Zoi Sadowski Synott and Tiarn Collins proved themselves up to the task and threw down for the win.

The week’s competition concluded with a prize giving ceremony at the Lake Wanaka Centre. Photos and footage from the event were shown and the overall prizes were awarded. 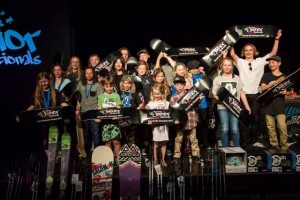