Riders enjoyed clear conditions as they competed for top scores in the Big Bucks Park at Cardrona Alpine Resort, with the female competitors first to take to the course this morning.

In a repeat of yesterday’s women’s freeski slopestyle finals, Kelly Sildaru once again stood atop the podium on 91 points, with Yuna Koga (JPN) in second on 85.3 and Sarah Hoeflin (SUI) third on 80.3.

Sildaru confirmed that she was happy to take back to back wins and get some well-earned FIS (Internationals Ski Federation) points in the bag as she looks to the bigger picture of qualifying for the 2018 Olympic Winter Games.

While the young Estonian skier dominated the field with consistently strong runs, second-placed Yuna Koga also impressed the judges with big spins on the jumps and technical rail work. Her switch left nine tail grab was judged trick of the day for women’s freeski and earned her a $250 Site Trampoline voucher.

After a hard day on course yesterday, unable to land a clean run, NZ’s Margaux Hackett came through today with two clean runs for a top score of 76.3 and fourth place, just narrowly missing the podium.

Zoi Sadowski Synott dominated the women’s snowboard competition with her smooth style and technical tricks. Even with a large point deduction following a fall on the second rail feature on run one, her jumps were impressive enough for a score of 62.7. Another Kiwi, Natalie Good (Cambridge), laid down a challenge with a score of 63 on her final run of three but Sadowski Synnott answered with a final score of 75.3 for the win.

Overcoming some nerves after stumbling on the rails on run one, it was the front three out of the top rail on her last run which would end up as her personal highlight of the competition. Knowing that she has even bigger and more technical tricks in her arsenal, Sadowski Synnott said she would have liked to have landed a personal best run in competition today. Nevertheless, she was “super happy” to come away with the win and relieved to have earned a strong result at the biggest competition of her NZ season.

For winner of the men’s snowboard slopestyle, Sebastien Toutant (CAN), the Cardrona Games are a chance to begin collecting the FIS points which are part of the qualifying criteria for the 2018 Olympic Winter Games.

“I’m stoked to be back in New Zealand and just to be snowboarding. I came to do the competition to get some FIS points. I just wanted to land my run and have fun, winning is a real bonus,” he said.

Whether he was focused on the end result or not, chances were always high that the five-time X Games medallist would put together a good show. The judges were impressed by Toutant’s smooth riding top to bottom on course and especially by his unique and technical tricks which saw his score lift from 85 on his first run to 91.3 on his second.

Japan’s Hiroaki Kunitaki had an impressive second run which scored him 82.3 points and second place. 16-year-old Kiwi rider Tiarn Collins (Queenstown) finished in third place on 80 points, stepping up yesterday’s qualifying run with back to back 1080s to secure his spot on the podium.

The men’s freeski slopestyle competition began with two qualifying heats, with the best score from two runs counting and the top four from each heat plus the next top four progressing to a 12-man final held at the end of the day.

In heat two GB’s James Woods was once again the top scorer on 92.3, followed by USA’s Ryan Stevenson on 82.7, Japan’s Tasei Yamamoto third on 79, and GB’s Felix Klein fourth on 74 points. Jamie Melton (USA), Tyler Harding (GB), Jackson Hipple (USA) and Peter Raich (USA) were the next highest scorers to make up the final 12.

While James ‘Woodsy’ Woods would ultimately come away with the win in a repeat of yesterday’s final, the rest of the competition featured an entirely different cast of characters all working hard to reach the podium. The judging panel were pleased to see multiple runs with doubles on all three jumps, technical tricks on the rails and creative use of the course.

Second and third places went to US competitors Peter Raich and Ryan Stevenson respectively. Both were awarded high scores for excellent execution of rail tricks backed up by technical jump lines.

An overall freeski prize was awarded based on combined placings over two days of competition which saw Woodsy in first place, Tasei Yamamoto (JPN) second and Ryan Stevenson third.

“It’s been a big two days of competition and I’m really proud to have won on both days,” said Woodsy. “It’s a big test to make two finals and to land two runs. Respect to all the competitors, everyone killed it.” 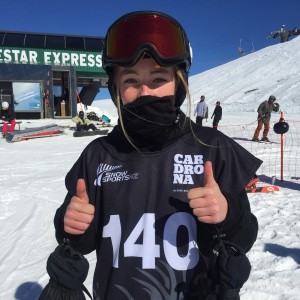