Cardrona Games 2016 Finish on a High with Freeski & Snowboard Halfpipe

Wanaka, New Zealand (15 September 2016)- Freeski and snowboard athletes were treated to clear, calm conditions for the final day of competition at the 2016 Cardrona Games today. 80 athletes, including home-grown Kiwi talent as well as a strong international contingent, threw down their best tricks in the 22ft high Olympic halfpipe at Cardrona Alpine Resort near Wanaka.

Kelly Sidaru (EST) claimed her third win in as many days in women’s freeski while Taylor Seaton (USA) secured the win in men’s freeski, beating NZ’s Nico Porteous by one point. Japanese competitors in particular were a tour de force, claiming five out of the 12 podium spots. Kurumi Imai and Naito Ando, both from Japan, were the respective winners of female and male snowboard.

Cardrona NZ Park & Pipe team rider, 15-year-old Nico Porteous (Christchurch) was the top qualifier in men’s freeski with a first run score of 90.3, easily meeting his initial goal to “put down a solid run and make it through to finals.”

“It’s definitely good to have a solid comp going down with a lot of good runs happening,” he said.

Seamus O’Connor (IRE) topped qualifying in the men’s snowboard division, boosting high out of the pipe and stomping clean landings for a score of 81.7 points. Pleased to land a solid run incorporating a front 720 on his third hit, he said he was looking to step up his runs to include doubles in the finals. Second placed qualifier, Naito Ando (JPN) impressed the judges with huge amplitude and technical riding, signalling his sights were also firmly set on a podium finish.

Slopestyle champion Kelly Sildaru (EST) surprised no one by putting down two superb runs in the halfpipe and topping the women’s freeski qualifiers a full 14 points ahead of her nearest rival, Japan’s Saori Suzuki.

In women’s snowboard, Australian Emily Arthur held the lead with a score of 77.3 for most of the qualifying rounds until Kurumi Imai nailed her second attempt for a top score of 83.7.

On to the finals and with no shortage of impressive and technical tricks on display, amplitude would prove to be a deciding factor across the board.

Backing up her performance in qualifying, Imai earned her top score of 82 points in women’s snowboard with a smooth, well controlled run showcasing a big melon air into big backside 5, front 7, cab 3, finishing with a front 9. Emily Arthur landed clean and technical runs but lacking the amplitude of Imai she would have to settle for second place. Junna Asaya, also from Japan, finished in third place.

Top qualifier Seamus O’Connor was last to drop into the pipe for men’s snowboard but unfortunately his podium aspirations were brought to an abrupt end with a crash on his very first hit which put him out of competition.

Japanese competitors finished one, two with Naito Ando on 95.3 and Ikkou Anai on 89 points. Ando brought home the win on his second run with huge amplitude and stylish, technical tricks bringing the wow factor with a huge front side 12 tail grab. Germany’s Andre Hoeflich finished third on 81.7 points.

Head snowboard judge Mike Hijgemann commented “Several things played into our hands today: the weather was fantastic, and thanks to the Cardrona Park crew the pipe was in immaculate condition which meant the riders didn’t have any distractions and could really step up. The level of riding was really impressive.”

Kelly Sildaru proved that she is at the forefront of progression in women’s freeski, laying down tricks such as both way 9s which few other female skiers in the world are currently doing. Her technique was exceptional, with consistently high amplitude, good variety and solid grabs. She never looked in doubt for the win, and nailed it on her second run with a score of 95 from a possible 100 points.

Second and third place-getters, Saori Suzuki and Yurie Watable of Japan, both had good runs with strong switch skiing, plenty of variety, and decent amplitude but lacked the grabs and bigger rotations which Sildaru had demonstrated.

The men’s freeski podium was decided with the very last run of the competition. Nico Porteous had sketched out on his first run and, the last man to compete, needed to better Taylor Seaton’s score of 95 points for the win. Laying down a highly technical run which included the only double landed in the competition, he looked like he was in with a good chance.

A nervous wait ensued as the judges took their time to compare two very different runs. While Seaton’s run had been less technical, it had been somewhat of a clinic in pipe skiing technique, with lots of variety, solid grabs held all the way through his tricks and the all-important amplitude. The finer details became key and in the end Nico’s final run, which had lacked a little in amplitude and the variety of grabs, was scored at 94 for second place. 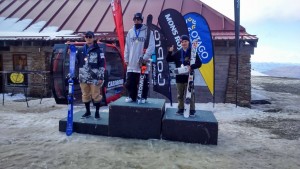