“Right from the start the Kiwi boys were going bigger than everyone else,” explains coach Bud Keene.

Byron Wells qualified second into the finals in heat two by laying down a stunner consisting of a switch left cork 7, alleyoop flat 5, left dub 12, right cork 9, and left cork 9.

In the finals it was truly the Kiwi show. With NZ skiers occupying three of the top four qualifying spots, they were all running at the end of the start list. Nico, although skiing extremely well, was unable to put down a clean run in the two run format. Byron and Miguel, however, came out swinging, stunning the judges and the crowd with huge and technical runs.

Coming into the competition with the goal of winning, Byron admitted to a few nerves when he found himself sitting in second place with a score of 86.50 after the first run. The USA’s Broby Leeds put together a strong opening performance for a score of 90.00 while Miguel Porteous was hot on his team mate’s heels with a score of 86.00.

“I was feeling bit nervous,” says Byron. “Miguel was skiing so well I thought he could have taken it.”

Knowing that he had the goods to lift his score, Byron took his first trick from a switch 720 to a 1080 rotation, following on with an alleyoop flat 5 shifty, left dub 12, right cork 9, and huge left cork 10 and landed a score of 92.25 on his second run. With neither Leeds nor Porteous able to improve their scores Byron had the win.

“I’m pretty stoked,” he says. “I’ve been working on a few new tricks this season and I feel like I’m skiing well.”

Byron now heads to Norway for the X Games in Oslo where he will be joined by brother Jossi (freeski slopestyle), along with Janina Kuzma (freeski halfpipe) and Christy Prior (snowboard slopestyle).

Queenstown skier Adie Lawrence was delighted with her medal winning performance in the women’s freeski slopestyle on Friday. She made a strong start, landing a clean rail section at the top of the course before going on to spin a 360 and then 540 rotation off the jumps.

"I had super good vibes while training so was really excited with the outcome!" says Adie!

First and second place went to US skiers Nadia Gonzales and Taylor Lundquist.

Nico Porteous and Byron Wells competed in the men’s slopestyle qualifiers. Byron’s run was good, but not technical enough on the jumps to get him through to semis, although he had a very cool and unique 270 butter on the wall ride that had the other competitors applauding.

Nico laid down two solid runs that qualified him fifth in his heat of 30 skiers to move into the semis. With snow coming down hard, he put down a run consisting of a switch 7, a switch misty 9, and a left dub 10 to advance.

In the semi final round of 30 the skiers were broken into two heats of 15 each, and the top six from each heat would advance to the final of 12. Nico put down a solid first run that included a solid performance on the rails, followed by a switch misty 10, into a switch dub 9, and finally a left dub 10 that put him in fifth. Unfortunately, he sketched on his step-up run, which finished with left dub 12, and was overtaken by a couple of better runs by other skiers and ended up seventh, narrowly missing the final 12. A fantastic result for the youngest competitor in the field! 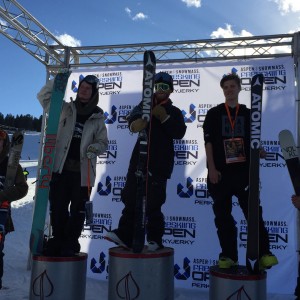