Byron has been a consistent member of Snowsports NZ’s elite freeski team representing New Zealand globally in Slopestyle and Halfpipe for over a decade. With a surname that is synonymous with success, it was no surprise to those that knew Byron when he burst onto the International Freeski scene in 2008 at just 15 years old.

With his brothers as his team mates and his father as his coach, Byron set out to make his mark on the Freeski World, and that he did. Byron’s impressive career included competing in 15 World Cups, eight Winter X Games appearances, a prestigious Dew Tour podium and he is a member of both the 2014 and 2018 New Zealand Olympic Winter Games teams.

“During his career Byron has worn the silver fern with pride, as well as representing himself and his family with distinction. A silver medal at the 2012 Dew Tour Halfpipe Finals was a standout performance, alongside his numerous Winter X Games appearances”. Tom Willmott, Head Coach Park and Pipe High Performance Programme.

A double Olympian in Sochi (2014) and PyeongChang (2018), Byron’s grit and determination, commitment and courage to return back to the top echelon of the sport following major injuries has been inspirational.  Byron’s contribution to the sport outside of the athletic sphere has included work as a judge, coach and event commentator.  He is internationally regarded as one of the sport’s good blokes who’s spirit will live on amongst the freeski community.

“We have no doubt Byron will continue to provide inspiration to the next generation through his role as a Snow Sports NZ Ambassador.  We wish him all the very best and look forward to his continued involvement.” Nic Cavanagh, High Performance Director.

As Byron reflects on his freeskiing career he would like to share the following message and acknowledgements:

“It has been an amazing journey this past 15 years as a professional skier, full of moments and friends I will cherish for the rest of my life. It was a roller coaster of a career, plagued with injury for the better part, but looking back there were some amazing highs as well. My career didn’t turn out as I had planned in my head but nonetheless I enjoyed the success I did achieve and got to travel the world doing what I love with my family. I wouldn’t change a thing as it has made me the man I am today.

I feel like now is the time to close this chapter of my life and focus on things that are now more important to me - as I’ve grown older my priorities have certainly evolved. My body is pretty beat up; my knees have been screaming at me for the last five years and I feel if I stop now I can get back to a point where I’m able to do some of the other things I love and keep enjoying this amazing life. I want to be able to kick a ball around with my kids one day, go on hikes and explore this beautiful backyard of mine without pain - and of course still enjoy getting on snow and putting out some film parts! I'm also really looking forward to some summers after 17 years of back to back winters.

I would like to thank everyone that has supported me over the years. All my sponsors Oakley, Atomic, Armada, Cardrona Alpine Resort, Mum, Dad and my brothers, I truly couldn’t have done it without your complete support. Thank you also to High performance Sport New Zealand, Snow Sports NZ, Shane Crowhen (strength and conditioning) for keeping me strong, Ginny Rutledge (physiotherapist) for fixing me every time I broke myself and kept me skiing over the years”.

So what’s next for Byron Wells? "I have been studying my Commercial helicopter license for a few years now and looking forward to finishing that off and starting a new career flying around the skies. I also proposed to the woman of my dreams, Ashleigh, and I can’t wait for what the future holds for us both". 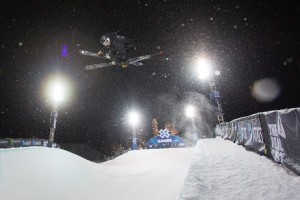