The fourteen-year-old, who is a member of Snow Sports NZ’s National Development Squad, was one of the youngest in the field and said the podium finish came as something of a surprise.

“I really didn’t see it coming as all of the girls were skiing so well in practice,” she said. “My first run went really well, I landed all my tricks so decided I would put in a new trick – a 720 – that I had never landed before. I’m so stoked!”

NZ’s Luca Harrington (Wanaka) had a solid finish in the men’s halfpipe, finishing in fifth place, and chalking it up as “one of the best moments in my skiing career so far!”

Harrington, also fourteen-years-old, was able to improve his score by nine points with his second run and said he’d met his goal “to land the run I’d been training for and come away with a good score and placing.”

Gustav Legnavsky faced a challenging competition when a technical failure led to his first run not being scored and he was unable to land his subsequent runs.

Andrews’ and Harrington’s results have qualified New Zealand quota spots at the 2020 Youth Olympic Winter Games to be held in Lausanne, Switzerland next January. 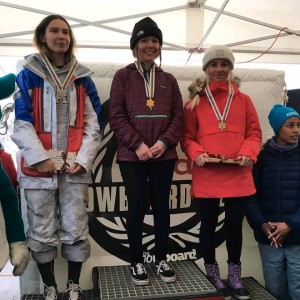